UWS proud to host visit by university leaders from China 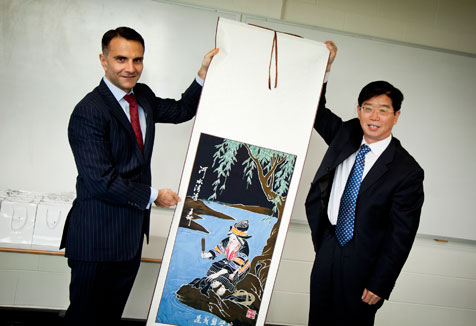 The University of Western Sydney was honoured to recently host a visit to its Parramatta campus from a high-level university delegation from Western and Central China.

The delegation comprised presidents and senior administrators from a number of universities, and was coordinated by the People’s Republic of China National Academy of Education Administration (NAEA) – an institution under the leadership of the Ministry of Education.

The visit was to discuss best practice in university strategic planning and development.

As one of Australia’s more modern universities, the delegation took the opportunity to visit the University of Western Sydney and hear about the University’s history, as well as its approach to student-centred learning, and putting the student experience at the forefront of all its operations.

During the presentations, the delegation received an overview about UWS by Mr Kourtis and a presentation on efficiency in education service delivery to students.

The visitors also heard from Mr Eric Sidoti, Director of the Whitlam Institute within the University of Western Sydney.

Mr Sidoti gave a presentation on Australian political leaders engaging with China - diplomatic ties that were first established by Gough Whitlam’s Government in 1972.

Gough Whitlam was the first Australian political leader and one of the first Western leaders to reach out to China, first visiting in 1971 when he was leader of the Federal Opposition, and then again in 1973 as Prime Minister.

UWS Pro Vice-Chancellor (Students and International) Angelo Kourtis says the University was very pleased to host the visit on the grounds of the historic and picturesque Parramatta campus.

“UWS is proud to have forged many strong partnerships with Chinese universities over the decades across all aspects of our teaching, research and international engagement,” says Mr Kourtis.

“We were very honoured to be able to host this visit and have the opportunity to showcase aspects of UWS to a great number of leaders from universities from across Central and Western China.

“We look forward to welcoming our esteemed visitors back to the University of Western Sydney in the near future.”