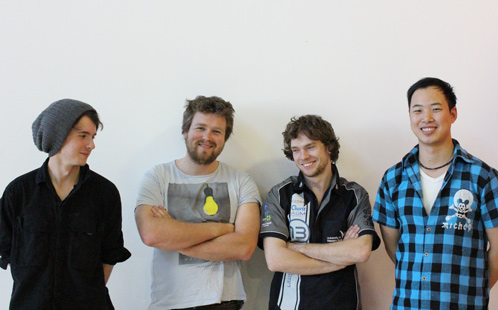 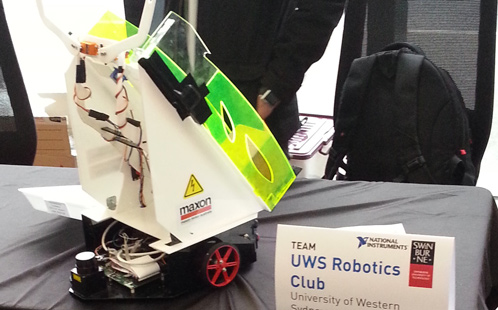 Students of the UWS Robotics Club have debuted their latest creation at the National Instruments Autonomous Robotics Competition (NI ARC) with impressive results.

The Club sent four students to Melbourne recently to compete in the finals of the Competition which attracted entrants from 22 Universities from Australia and New Zealand.

Craig Burrows, Michael Jay, Lixang Li and Nicholas Ralph, students of the School of Computing, Engineering and Mathematics, have worked on designing and constructing their robot over the last year and were pleased with how they placed.

"This was the first time that UWS had entered the competition and for us to make it to the qualifiers and fly to Melbourne was incredibly exciting," says Li, Bachelor of Engineering (Advanced).

"We were even happier to place first in our heat and make it to the quarter finals where we competed against UTS who have had years of experience."

Each team was supplied with a NI Single BoardRIO, software and a gift voucher from Maxon Motor, a kit valued at over $20,000, to help get them started. Teams were required to design and construct a robot that could complete a set challenge. This year's challenge followed the theme of 'mining'.

"Our robot had to be able to navigate through a course, distinguish between two objects, one meant to be rock and one gold, pick up the gold and then navigate back out of the course," says Li.

The course and theme were designed to test the robots' object handling and obstacle avoidance abilities, and thus ultimately the students' integration of supplied equipment, creativity and programming skills.

"Most of what we had to do for the competition is well in advance of where we are up to in our degrees," says Li.

"For example, this was the first time I encountered 3D printing, rapid prototyping and this level of programming and electrical work."

Having learnt from the experience, and that of other teams, the UWS Robotics Club is looking forward to returning next year with an even more skilful entry.

"I've talked to everyone in the club and we're all up for the challenge again next year," says Li.