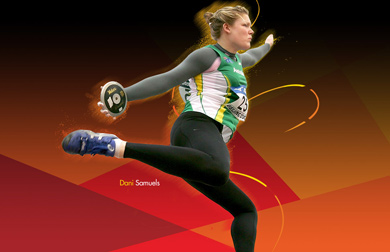 As Australia’s Olympic team return home from the London Games, the University of Western Sydney congratulates its athletes, James Clark and Dani Samuels, on a stellar performance.

James, a 21-year-old Bachelor of Business and Commerce (Property) student at UWS, made his Olympic debut as a Goalkeeper in the Australian Men’s Water Polo team.

The Men’s Water Polo team maintained a strong Olympic campaign in London, posting their best result at an Olympics in 20 years.

Out of eight games, Australia produced three wins and ultimately finished in seventh place. A standout match, on 12th August, gave the team an opportunity to demonstrate their determination and courage, by pulling out a win against the United States even though they were already out of the race for medals.

As one of the “young guns” of the team, James is likely to represent Australia in next year's world championships in Barcelona and the Rio Olympic Games in 2016.

Dani’s Olympic campaign was also a nail-biter. The 2009 world discus champion produced the fourth biggest throw of her career, 63.97m, to secure her spot in the finals.

In the race for the medals on 4th August, Dani was unable to beat the likes of Croatian Sandra Perkovic – who secured gold with a massive 69.11m throw – and ultimately finished in 12th position.

The University’s Olympic journey will continue with the 2012 Paralympic Games, which begin in London on August 29th. Flying the flag for UWS will be 20-year-old Hannah Dodds and 19-year-old Michael Auprince.

Hannah, a Bachelor of Health Science (Sport and Exercise Science) student at UWS, will join the Australian Paralympic Equestrian Team in London, where she has been classified as a Grade 4 competitor – the lowest level of disability with the highest degree of difficulty in the tests.

Michael, a Bachelor of Arts (Pathway to Teaching Primary) student, will represent Australia in swimming and is likely to complete in a series of events including the 50m backstroke, 100m backstroke and the 200 metre individual medley. He will compete in the S9 category, for swimmers with a minimal disability.