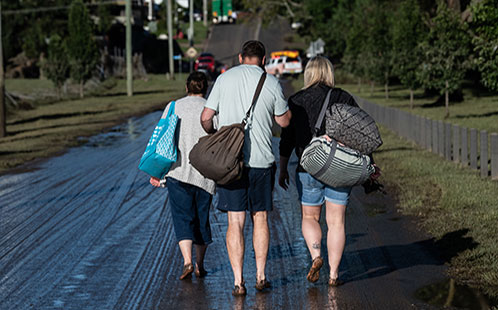 Extreme flooding in New South Wales in March triggered a two-week frenzy of media interest. But while the camera crews and journalists have since moved on, communities still face a long recovery.

Many flood-ravaged homes have not yet been repaired and others are infested with mould. Farmers are struggling to fix damaged infrastructure, while dealing with weed outbreaks and the memories of livestock killed in traumatic circumstances.

I’m a water scientist with a growing interest in post-flood recovery, and recently visited several flood-affected areas in NSW. In the Hawkesbury-Nepean River I found nutrient-heavy and contaminated water. In the Southern Highlands, minor flooding persists and many fallen trees and damaged fences remain. And near the Gwidyr River at Moree, as elsewhere, crops and roads remain damaged and weeds are thriving.

Some communities were grappling with the effects of bushfire, drought and COVID-19 before the floods hit. And some flood-affected areas are now also dealing with a mouse plague. In these most difficult circumstances, it’s worth looking at the practical recovery actions most likely to help and the long-term challenges ahead.

Yet another farming crisis

Many farmers have months of work ahead to recover from the floods. Some lost livestock to flood waters; cattle were found washed up on beaches, in trees, on streets and in neighbours’ backyards. Farmers spoke of their trauma after hearing the helpless bellows of their drowning cows.

The loss of livestock is a major blow after years of drought. And booming stock prices means buying sheep and cattle to rebuild herds is expensive.

Adding to post-flood stress for farmers, they must be extra vigilant about protecting their livestock from disease. Flystrike, cattle ticks and internal parasites can thrive in wet conditions, and persist long after waters recede.

The floods ruined thousands of kilometres of fences and destroyed crops and pastures. In some cases, nutrient-rich flood waters transported weeds to new areas, or caused dormant seeds in the soil to sprout weeds.

When the mould takes hold

Many homes, schools and businesses are still waiting for repairs. This is a common problem after floods. Six months after the disastrous 2019 Townsville floods, for example, a combination of slow insurance payouts and shortage of tradesmen meant only 1,400 of 3,300 damaged homes had been repaired.

In NSW, some flood-hit homes are currently battling mould. This microscopic fungi penetrates internal walls and ceilings as well as furnishings. In some cases, it is growing in wall cavities, posing an “invisible” health risk.

Mould can be wiped away from impenetrable surfaces such as glass, tiles and metal. But once absorbed by porous building materials, such as plywood, chipboard and plasterboard, mould can be nearly impossble to remove and the materials must be replaced.

Seek expert advice from your local council’s environmental health officers to deal with large areas of mould. It may be possible to clean up small areas of mould yourself, but use protective equipment. Mould can be a health hazard, and breathing it in can trigger asthma, even in people without an existing allergy.

By the end of March this year, some 11,700 insurance claims for flood damage had been submitted, and the number was expected to grow.

After natural disasters, people often find their insurance policy does not cover the damage, or their claim is rejected. If you’re struggling with an insurance claim, independent help is available.

The problem of under- or non-insurance is likely to worsen under climate change. Climate Council research shows one in every 19 property owners face the prospect of unaffordable insurance premiums by 2030. Flood-prone properties near rivers are particularly at risk.

Six years after the 2011 Brisbane floods, a survey of 327 victims found they continued to suffer adverse physical and mental health effects. The impacts can be worse for people already suffering  chronic diseases.

And many people – particularly those living in disadvantage before the floods – have barely begun the recovery process. Some are relying on food vouchers, or living without essential items such as fridges and washing machines.

After a string of catastrophic disasters in recent years, the Australian public may well be suffering from “compassion fatigue”. That’s understandable. But flood victims clearly still need our help.

If you can, donate to the ABC NSW Flood Appeal. And if you’re one of the people struggling, remember you’re not alone. Your fellow Australians do care and there are many avenues for assistance. Please don’t hesitate to ask for it.

This story is part of a series on the nexus between disaster, disadvantage and resilience. It is supported by a philanthropic grant from the Paul Ramsay Foundation. Read the rest of the coverage here.

This article is republished from The Conversation under a Creative Commons license. Read the original article.