‘Uprooting, No Matter How Small a Plant You Are, Is a Trauma’: Older Women Renters Are Struggling 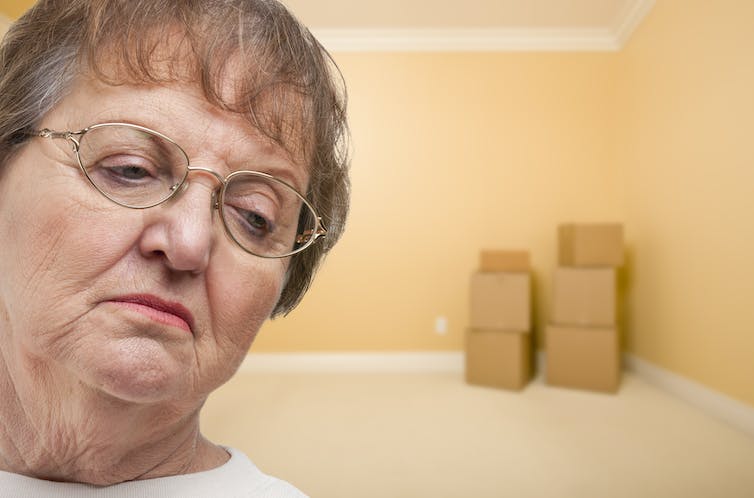 Shutterstock (opens in a new window)

Older women renters are struggling in an insecure (opens in a new window)and unaffordable rental housing market. A combination of high rents and low incomes leaves many living in substandard housing and unable to afford necessities like food and energy bills.

My research shows rent increases further stress household budgets, and evictions magnify these risks. COVID-19 makes the need for reform even more urgent. Secure housing is the first line of community defence (opens in a new window)against the pandemic.

Read more: 400,000 women over 45 are at risk of homelessness in Australia (opens in a new window)

In a report released today (opens in a new window), single older women living on low incomes describe to me how high and rising rents left them struggling to meet day-to-day costs. Many paid rent before they bought food or paid power bills because the alternative was eviction. This is why the Productivity Commission (opens in a new window)describes rental affordability as a “driver of disadvantage” for low-income households. 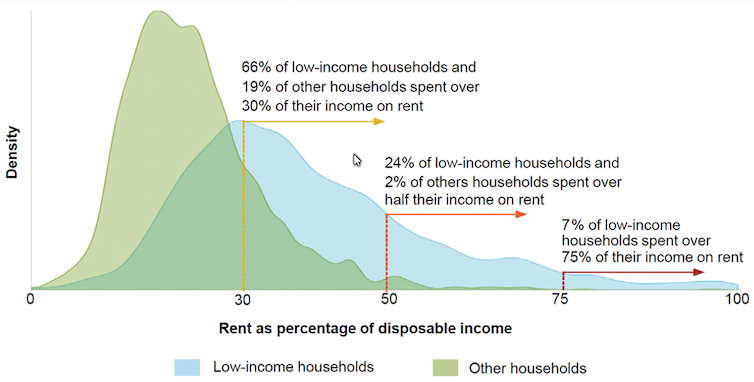 Read more: Growing numbers of renters are trapped for years in homes they can't afford (opens in a new window)

For example, a rent increase left Tracey, a participant in my research, with only $30 after other essential costs were covered. She described her efforts to survive as “like my job. I’d go to one [charity] where they had the food cupboard and fresh produce” and to another where she could get a monthly food voucher. This experience was common.

Gaps around all the windows and all the doors where literally, when it was windy, the curtain would blow and the wooden shutters, the wooden blinds, would actually blow.

While the rent was affordable, the cost for the house “rose astronomically” due to the need to use a heater throughout winter. Another participant, Toni, bought heavy curtains to try to block out the cold in her rental and, in an extreme example, clad the outside of two properties with tarpaulins to reduce draughts.

Most older Australians wish to age in place in a familiar home and community. This is not an option for many older renters.

Read more: For Australians to have the choice of growing old at home, here is what needs to change (opens in a new window)

As Gwen explained, “It’s all a cost factor.” For women living on already stretched budgets the risks are magnified.

Many women borrowed money to cover moving costs. This left them in debt that, as Gail explained, could take “months” to recover from.

You’ve got no choice. You’re parting with things that – well everything you’ve got together are part of your belongings and part of who you are and who you’ve established yourself to be. […] It’s part of your home.

Michelle drew parallels with the experiences of people “whose house caught fire or who’d had a flood” – only she was able to make choices about what to keep and what to give away.

The emotional costs were immense. Women described the stress and disappointment of forced relocations. Jenny explained the need to emotionally detach from her house:

And once you know you’re moving, all of a sudden that house is no longer your home. You get to the point of saying, okay, this house isn’t mine – it’s only a house where I’m living at the moment.

[…] means rifling through my paltry possessions fairly often and that I find upsets me a bit. […] uprooting, no matter how small a plant you are, is a trauma.

I report on these experiences of having to move house in further detail in a just-released research paper (opens in a new window).

Read more: What sort of housing do older Australians want and where do they want to live? (opens in a new window)

It is time for reform

Our federal government needs to permanently raise the JobSeeker payment and act on  housing affordability to give low-income renters a fighting chance.

At a state level, it is time to end “no grounds” evictions. “With cause” measures, as recently introduced in Victoria, better balance tenants’ needs for housing security with the rights of landlords to repurpose properties when required.

We also need quantified minimum rental housing standards. New Zealand’s Healthy Homes (opens in a new window)standards can be a model for us. These standards ensure only properties that are healthy and sound go to market.

The number of older Australians who rent is projected to increase over the next decade as home ownership levels decline (opens in a new window). The stories of older women in the private rental sector are a warning about the risks that declining housing affordability and rental insecurity pose to this growing group. They are the “canary in the coalmine” for Australia’s housing system.