David Borger will launch c4SMC to the industry on the 16th November 2017.

This week saw the c4SMC team at the 'Creating Australia's Best Airport City' conference. David Borger, Director of the Western Sydney Sydney Business Chamber was acknowledged as 'Mr Western Sydney Airport' and rightly so. He has been on the case for many years. He is driven by the need to shift the needle on where Western Sydney's workforce will be employed. 'Driving east is not a sustainable or reasonable option for our highly qualified community as its population grows from 4.7 million to 8 million over the next 40-years', he said. The new Airport-City will be a hub for smart enterprises and over 28,000 new smart jobs with operations due to commence in 2026. The construction industry will be a central part of realising not only the Western Sydney Airport development, it will be the sector that will build the surrounding Airport-City and the infrastructure that will house, employ and transport people across 2-city regions currently known as the Western Sydney Parkland City embracing Campbeltown Liverpool, Penrith and Blacktown, and the Central River City encompassing Parramatta, Rhodes and Homebush. These cities will be companions to the Eastern Harbour City, but they must be be much more than a dormitory for the thousands who currently make their way eastward each day. The planned transformation of Western Sydney will turn this around. Western Sydney certainly has the talent to make it happen.

Industry Engagement is at the heart of c4SMC. The initiative is about working with the industry to deliver the capabilities that will be needed to perform the many types of construction that will be undertaken in Western Sydney over the next 20-years. c4SMC will build on the strengths of Western Sydney's construction related enterprises as they grow in the years ahead. The Centre's Director, Professor Srinath Perera believes that industry and academia must work much closer together to agree what the industry's capability building priorities are, and build these into the Construction Management program. Professor Perera believes this will identify new Smart Modern Construction research and new program content that helps to prepare our next-gen constructors.

By 2025 Professor Perera expects more than 1500 professionals will graduate from the University's Construction Management (CM) program. These professionals will mostly be employed by Western Sydney construction enterprises. They mostly live in Western Sydney. He said, 'These constructors must be future ready and have the applied capabilities to make important contributions to the enterprises and projects they lead'.

Our c4SMC initiative takes a new approach to industry engagement. It will aim to engage with over 100 small to medium sized construction related enterprises. These will include new enterprises just starting and those who will mature as they expand and take on or help to deliver important project projects across Western Sydney over the next 20-years. c4SMC will involve a collaborative investment where these enterprises can contribute to recurrent new funds of $4 million every 3-years to be deployed to the benefit of industry and future graduates. Investment will be scaled for the supporters.

Importantly, c4SMC will involve industry in selecting and directing their investments. This is a major issue for an industry that works on tight margins and wants to see value for money from their support. The want to be sure that their investments are applied to initiatives that can have an impact in 3 to 5-years. The industry accepts that universities also need to take on larger research projects and funding. But, their immediate preference is to invest in smaller short term projects that will guide them in the short to medium term as they negotiate a rapidly transforming global industry. Industry has made it clear that they want to be engaged and have an an impact where their collective contributions can help achieve outcomes that would not have been possible otherwise.

The industry launch of c4SMC will attract industry clients, contractors, academics, students, manufacturers, designers, technology companies, legal and accounting professionals, government and industry associations who see benefit it taking a more joined-up approach to charting the construction industry's modern future, together. If you are interested in becoming part of c4SMC why not register and come along. 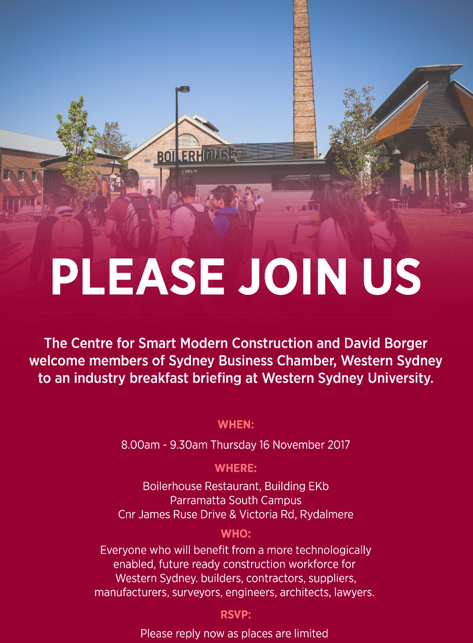