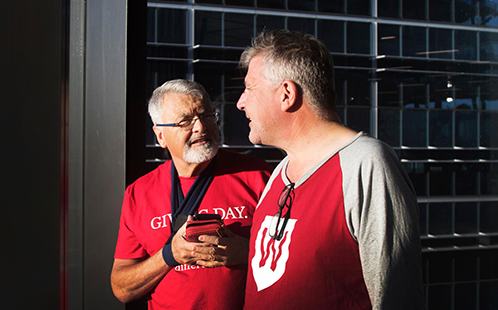 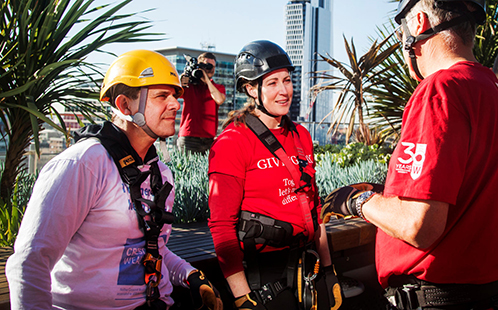 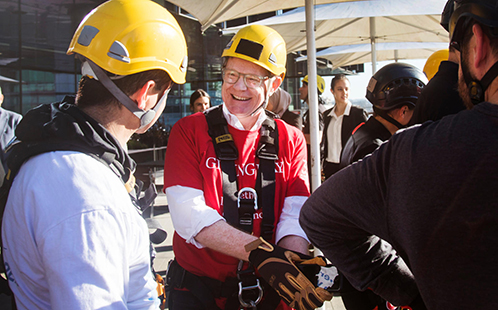 Western Sydney University is launching its very first Giving Day on Wednesday 4 September – a flagship fundraising event that will ask supporters to donate to any one of the University initiatives they are most passionate about, including scholarships, the student-led solar car team, and world-leading research conducted by the MARCS BabyLab.

However, in an unplanned twist, the dare-devil Professor Shergold may have peaked a little early, with a ski-field accident rendering him unable to participate in his own abseiling Challenge.

"Unfortunately, in a white-out I skied off a three-metre crevice. I dislocated my right shoulder and I had to be brought down the mountain in a stretcher. It was a rather desperate way to avoid abseiling!", joked Professor Shergold.

“I will still be closely involved in the Chancellor’s Challenge - with my good arm, I’ll be supervising the ropes as these brave and dedicated individuals fundraise for various University programs. I personally will be supporting the MARCS BabyLab and its ground-breaking research into language development in young children and the profound impact this can have on their future,” he said.

Celebrating its 30th anniversary this year, Western Sydney University has grown to become one of the world’s leading universities and the largest, most established higher education institution in Western Sydney, playing a pivotal role in the social and economic transformation of the fast-growing region.

“Western Sydney University has a proud tradition of providing transformational educational opportunities for the people of Western Sydney and conducting world-leading, impact-driven research that is making a difference, particularly in the lives of people from our region,” said Professor Shergold.

“I invite our friends and supporters to join with me to get behind Giving Day, and support our life-changing scholarship programs and educational and research initiatives that have demonstrable impact in the communities we serve. Together, we can make a difference.”

Scholarships – every year the University awards more than $24 million in scholarships and grants to students. The University is raising funds to expand its scholarship program and develop the transformative educational opportunities it can deliver.

MARCS BabyLab – a specialised infant research centre that is producing world-leading research into language disorders, including dyslexia, to ensure the success of our next generation.

Western Sydney University Solar Car – In 2018, University’s student-led solar car team became the first international and first Australian team to win the American Solar Challenge. The team, made up of Engineering, Industrial Design and Visual Communication students, are inspiring the next generation of sustainable energy experts.

To learn more or to donate, please visit the Giving Day website (opens in a new window).