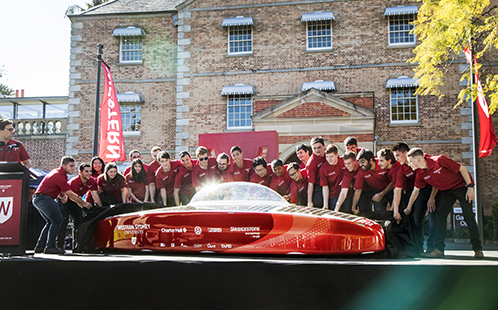 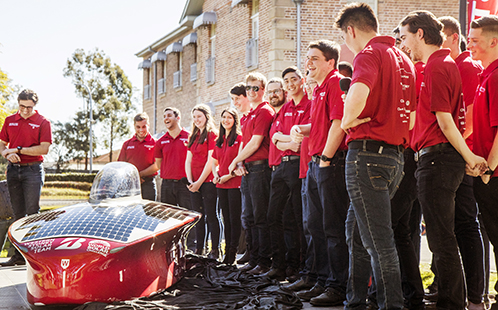 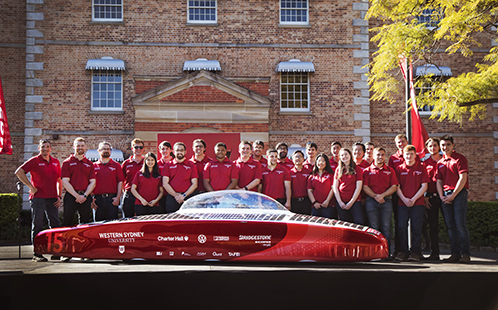 Today, Western Sydney University’s Solar Car Team with support from the School of Computing, Engineering and Mathematics has unveiled UNLIMITED 3.0 — the most technologically advanced car the student-led team has produced to-date.

Team Manager and engineering student, Max Mammone, said the team is incredibly proud of the car they have built almost entirely on campus — from its custom carbon fibre shell through to its bespoke battery pack.

“Together, the team put in over 30,000 gruelling hours to design, build and perfect the new car in time for this year’s challenge. By bringing the production in-house we have been able to push the boundaries of sustainable design even further,” said Max.

“UNLIMITED 3.0 is aerodynamically optimised with highly efficient solar cells that will power the entire 3,000km journey using the same amount of energy as a household kettle.”

Western Sydney University Vice-Chancellor and President, Professor Barney Glover AO, congratulated the team of students on the launch of the car and their tireless dedication to solar power innovation.

“The unveiling of UNLIMITED 3.0 is a testament to the ingenuity and dedication of the Solar Car Team and reflects Western Sydney University’s commitment to providing real-world learning opportunities in STEM,” said Professor Glover.

The World Solar Challenge is a bi-annual international race, and this year marks the fourth time the Western Sydney University team will compete in the Challenger Class. This is the most competitive class requiring teams to produce a high-quality single-seat car built for sustained endurance and energy efficiency.

Bridgestone World Solar Challenge Event Director, Chris Selwood AM, said it was exciting to see how far the team has come since its inaugural bid in 2013.

“From very humble beginnings, this team has gone from Australian underdog to genuine contender and is one of the spearheads of this year’s Australian charge. Western Sydney University’s considerable investment in home-grown Australian green-tech innovation and young talent is to be commended,” said Mr Selwood.

Western Sydney University’s Solar Car Team is made up of 22 students from the fields of Engineering, Industrial Design, Computer Science and Visual Communications. The students manage every aspect of the production and design of the vehicle, as well as sponsorship, marketing and the administrative elements of their involvement in the Challenge.