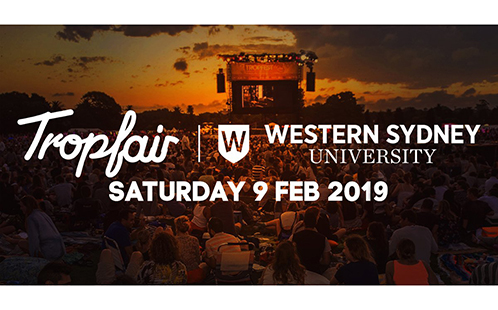 Tropfair presented by Western Sydney University is headlined by an elite panel talk including Nash Edgerton (Gringo) and Michele Bennett (Chopper), and will present the latest film and screen technology.  Visitors have the opportunity to see the latest film tech from exhibitors including Animal Logic Academy, Jason Van Genderen (Tropfest NY 2008 winner) and Camera Hire.

Later that day, the works of finalists from across Tropfest and Trop Jr will premiere at the public viewing at The Crescent, Parramatta Park. The winner of Trop Jr will be offered the opportunity to use Western Sydney University's state-of-the-art broadcast studios valued at $12,500.

Since its inception in 1993, Tropfest has played a pivotal role in fostering the careers of some the biggest and brightest names in the film and TV industry, including Sam Worthington (Avatar), Joel Edgerton (The Great Gatsby), Rebel Wilson (Pitch Perfect).