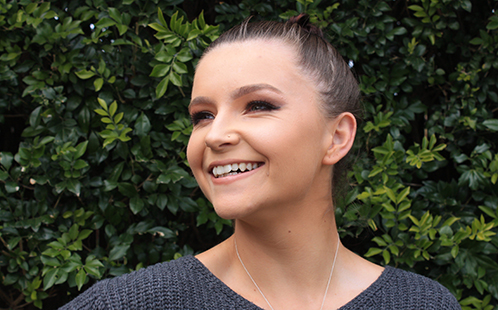 Despite being nominated for the Seven News Young Achiever Awards (opens in a new window), stellar student Kiara Osborne admits she hasn’t always enjoyed learning. In fact, she dropped out of high school and struggled with abuse from a young age.

“During my years of secondary education, I didn’t receive much support. This lack of compassion towards my education, and essentially my future, was based on the idea that I was never really going to amount to anything,” said Kiara.

She withdrew from her studies and began full-time work to support herself, and through this experience Kiara found she was able to grow her confidence, both professionally and personally, which helped her to re-evaluate her life path. With further encouragement from a colleague, Kiara made the decision to return to study a Diploma of Arts at Western Sydney University’s The College.

“I believe that it can go one of two ways: live a life that focuses on all of the negative aspects or use your experience as a tool for self-growth and prove to everyone that you can succeed, despite the odds that are against you.

“I have worked really hard to be where I am academically and professionally and to have others support me and recognise my abilities is something that's worth more than any award,” she said.

Kiara was nominated for the Western Sydney University Academic Achievement Award by her teacher, Mohammed Sabsabi, who will join her at the Awards Gala Presentation Dinner at Doltone House on 1 March.

“When Kiara enrolled at University she had no idea where her studies would lead her. Kiara's transformation is due to many reasons but I believe the number one reason is that she exhibited classic traits of a successful learner. In class, I invite all my students to comment, question and criticise, and she did so with passion and intent, with consistency and persistence,” said Mr Sabsabi.

After recently completing her Diploma, the 21-year-old plans to study Psychology at Western Sydney University and open her own fitness business focused on positivity and good mental health.