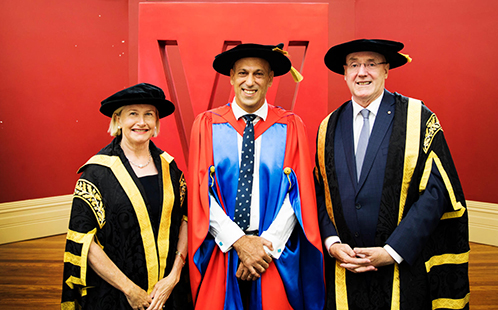 A Magistrate, an advocate for homeless people, a western Sydney region-shaper and a champion of the arts have all been celebrated during Western Sydney University’s final graduation ceremonies for 2019.

Each of the four individuals have received honorary awards from the University for their outstanding work and remarkable contributions to the community.

The graduation ceremonies were held Tuesday 17 December and Wednesday 18 December at the University’s Parramatta South campus.

The honorary award recipients were:

Western Sydney University Vice-Chancellor and President, Professor Barney Glover AO, congratulated each of the honouary awardees on their remarkable achievements.

“Graduation is a time to honour the work of our exceptional students and  to recognise distinguished Australians who have demonstrated outstanding leadership in their respective fields and service to Australian public life,” said Professor Glover.

“On behalf of the University community, I warmly congratulate His Honour, Magistrate Imad Abdul-Karim; Christopher Brown AM; Adjunct Profesor Carrillo Ganter AC and Mrs Christine Cleary on their honorary awards.”