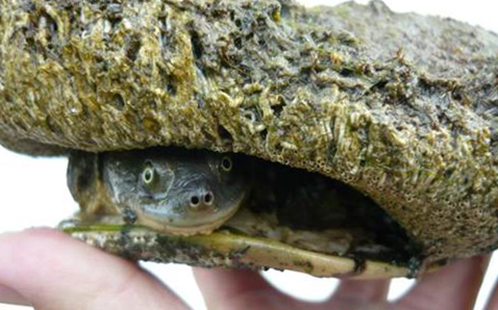 Western Sydney University has contributed to new Australian research into native turtle populations in the Murray River and some of its associated waterways. The study finds that species are in decline in the lower Murray River region, and some were undetected in many locations in South Australia.

According to Associate Professor of Ecology Ricky Spencer (opens in a new window) from the School of Science and Health at Western Sydney University and a School-based member of Hawkesbury Institute for the Environment, the decline was first predicted over 30 years ago but a combination of funding limitations, political constraints, and limited data has pushed our native species to the brink of extinction.

“This is the first time research in the field takes such as deep and systematic look at turtle populations throughout the southern Murray River catchment, to identify likely hotspots of turtle declines and map geographic trends in turtle population,” says Associate Professor Spencer. “Our research provides further evidence that freshwater turtle populations in southern Australia are rapidly declining. Even in areas where they are abundant, most populations have only older adults, resulting in few babies entering the river.”

The data indicates that populations of the three species were generally highest in the mid-Murray region, reaching from north-central Victoria and south-central New South Wales. Overall turtle abundance decreases as the Murray River approaches the ocean, resulting in zero or very few turtles of any species caught at several locations in South Australia, including Calperum Station, Ramco Lagoon, and Currency Creek.

Associate Professor Spencer adds that Australia is now at the stage where the effects of invasive species and habitat destruction are being observed through species declines and extinction events.

“The drought in the Murray-Darling Basin increases stress levels on declining species such as the Murray River turtles. Turtles fulfil an important ecological role as scavengers of dead fish and the consequences of high mortality rates are significant for the health of the whole river ecosystem.

“Australia deals with some unique factors leading to a decline in turtle population including introduced predators that ruthlessly destroy most nests each year, disease, road mortality and the fact that we are dry country and water resources have many competing demands,” says Associate Professor Spencer.

He adds that a novel disease has caused the near-extinction of an Australian freshwater turtle (Myuchelys georgesi), and may be a symptom of deteriorating water quality and climate change.

Across Australia, nearly half of all turtle species are listed as vulnerable or worse by state or federal agencies. Previous studies found turtle declines of up to 91% have been observed in sections of the Murray River.

The report Conservation implications of turtle declines in Australia’s Murray River system was first published in Scientific Reports (opens in a new window).