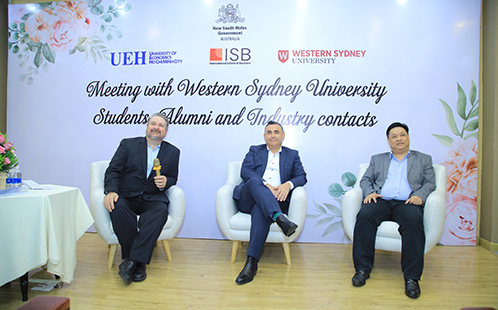 The Deputy Premier came together with University business students and alumni, along with industry partners and University representatives at a function held on Thursday 7 November at the University’s campus in Ho Chi Minh City.

Western Sydney University has a longstanding presence in Vietnam, establishing a partnership with the University of Economics Ho Chi Minh City (UEH) in 2008 to deliver a range of joint undergraduate and postgraduate business degrees, as well as collaborate on research initiatives.

Since the partnership began, more than 600 students have completed degrees, either in Ho Chi Minh City or in Sydney. The University officially opened its Vietnam campus in December 2015, which has further strengthened the collaboration between the two institutions.

The NSW Government has a sister-state relationship with Ho Chi Minh City, following the signing of a strategic partnership between NSW and Ho Chi Minh City province in April, to help boost trade and investment and deepen ties between the two states.

“This was the first MoU the NSW Government has signed in Vietnam and we hope it will provide the impetus for significant growth in the education sector,” said Deputy Premier and Minister for Trade John Barilaro.

“We hope to work more closely in the future with partners like WSU and UEH on initiatives that see more Vietnamese students in NSW, new collaborations, and stronger NSW engagement in Vietnam.”

“We have been pleased to showcase to the Deputy Premier the positive impact that our world-class joint degree programs and partnerships are having on higher education attainment in Vietnam and throughout the region,” said Professor Sweeney.

Provost of the University’s Vietnam campus, Professor Yi-Chen Lan, Pro Vice-Chancellor (Global Development), said the University and UEH will further expand their partnership over the next five years.

“Together with UEH we are looking at a range of additional programs to help further boost higher education participation throughout the ASEAN (Association of Southeast Asian Nations) region, including short professional development courses for local businesses and corporations, collaborative research projects and increased staff and student exchange.”