Blue-sky thinking for Nancy-Bird Walton airport and beyond 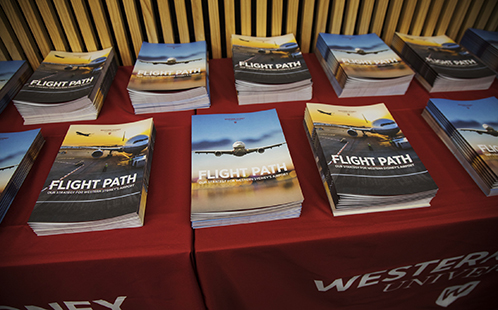 “Western Sydney University is committed to championing the critical strategy that will ensure this huge infrastructure project is so much more than just an airport. Early alignment of government, industry and education strategy is just as important as the bricks and mortar used to build these projects,” Professor Shergold said.

To launch Flight Path, thought-leaders – including the Vice-Chancellors from the University of Wollongong and the University of Newcastle – and industry representatives took part in panel discussions on how to leverage Western Sydney’s growth.

Western Sydney University Vice-Chancellor and President, Professor Barney Glover AO, noted the benefits of the University’s collaborative network within the region to assist with the coordination and expansion of the best opportunities.

“Western Sydney is not simply ready for an airport: we are committed and capable of making Western Sydney Airport a transformative, impactful, and innovative infrastructure project. That’s what the region deserves,” said Professor Glover.

The report was developed in collaboration with KPMG, who assisted in defining the key industries that will grow within the Aerotropolis region, including: aviation services, advanced manufacturing, smart logistics and agritech.

“We are proud to be working with Western Sydney University on this region-shaping report and look forward to seeing its realisation in the region,” said David Pring, Managing Partner, Western Sydney KPMG Australia.