The following article was first published online in ABC News. (opens in a new window) 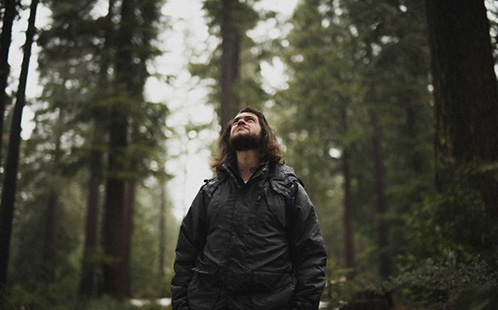 It's at the heart of the paleo diet, the "running without shoes" trend, even the Hollywood blockbuster Avatar. "Primitivism" is all around us, glamorised on Instagram and shaping the food we eat, the way we exercise and how we engage with the world.

But primitivism isn't just one ideal. Some people look to their hunter-gatherer forebears, others romanticise Adam and Eve in Eden, while others take inspiration from indigenous tribes living outside western influence.

Can 'rewilding' really deliver a more natural, authentic self?
For Ben Etherington, a lecturer in postcolonial and literary studies at Western Sydney University, there's a key difference between hardcore primitivism (say, ditching the city for a tech-free, self-sufficient life in the wilderness) and a fondness for natural, earthy living.

"[The latter is] more like that self-help TED Talk version of primitivism."

"It's when you don't want to leave the perks of urban, industrialised life, but you just want to be a bit 'truer to yourself'.

"Maybe you'll spend a couple of weeks out in the wild, maybe you will emulate the diet of paleolithic people."

From paleo to primitive technologies
Despite questions around its health claims, the paleo diet shows how nostalgia for a simpler, more natural state can spawn a hugely influential worldwide trend.

The diet's premise is that our bodies evolved on a hunter-gatherer-style diet over tens of thousands of years, and it wasn't until agriculture came along that we started eating things we weren't "supposed to", such as wheat and dairy products.

Dr Etherington points out that our desire to mimic paleolithic eating habits says less about food and more about our disillusionment with the world and our place in it.

"These utopian ideals tell us that something is wrong with the current state of things," he said.

In subscribing to this diet and doing away with grains, he believes we're not only rejecting civilisation, we're blaming technological advances (and convenience) for our disconnection with nature.

But it's not just the paleo diet that indicates a disenchantment with modern farming techniques.

Outdoor educator Scott Poad has been a vegetarian for the past 20 years, and says the decision is grounded in ethics.

"I didn't like the factory-farming, the broad-acre clearing of land to grow meat," said the founder of ReWild, a company offering courses in nature awareness and traditional survival skills.

"I think definitely with the advent of agriculture, 10,000 odd years ago, it did change dramatically not only how we ate but also how we lived in society. We became a lot less nomadic and more centralised."

Scott Poad sitting on hand-made bamboo log bridge across a small stream in the bush.

As the co-founder of ReWild, Mr Poad has taken his experience of rejecting civilisation further than most.

He's a specialist in "primitive technologies" (such as starting a fire with sticks), and his partner Sally Warren is an expert in foraging and making herbal medicine.

Mr Poad says these ancient traditions foster a deeper connections between humans and their surroundings.

"Most of society is pretty detached from the earth," he said.

"Practising these primitive skills gives you a greater appreciation of the earth and its resources."

Mr Poad adds that simply being in the bush can have positive impacts on humans.

"It's just a slower pace of life. For me it feels a lot more authentic," he said.

"It's not superficial, it's not busy-busy trying to fill our lives with distractions — we're constantly over-stimulated in the city."

Distant utopias and eroticised 'others'
Cynicism towards modern city life is present in primitivist utopias on screen, too.

In the 2009 sci-fi blockbuster Avatar, the protagonist Jack Scully finds solace in the pristine planet of Pandora.

"His mission is to infiltrate the Na'vi, a group of alien creatures who resemble, more or less, a mish-mash of non-western tribal cultures," explained Dr Etherington.

"Instead of going there to conquer those quote-unquote "primitives" he ends up falling in love with one … and ends up defending the Na'vi against the invading forces from planet Earth."

In the philosophical tradition, this romanticising of the "other" is nothing new.

Frenchman Jean-Jacques Rousseau covered the topic in 1755 with his Discourse on Inequality. He wrote that we need to believe in primitive ideals, even if they don't exist, so we can judge corrupted social systems.

While primitivism isn't instilled with a "West is best", colonial, mindset, it still places non-western peoples and cultures in a subordinate position.

James Cameron himself told Playboy magazine that the female Na'vi had to "have tits", and reportedly instructed concept artist Jordu Schell that the aliens must take a form "that the audience wanted to f***".

Even in a utopian galaxy far, far away, primitives still exist to be objectified and conquered.

Can primitivism be ethical?
From an appreciation of people and cultures outside our circles, to a deeper regard for the environment, there are positives that can be drawn from primitivism.

But does the residue of colonialism tarnish any good will?

For Dr Etherington, primitive idealism isn't the issue, it's what we do with the ideal.

"Do we say, 'OK, here I am, a white man in the centre of a large city. Why don't I just leave my home and go out into the wild and try to recover a primitive self?'.

"The problem with that is it doesn't scale up very well. If everybody did that at the same time, it would probably be utter chaos."

But Scott Poad believes we can all embrace primitivism, be it in the form of a bushwalk, a foraging expedition or a night under the stars.

And perhaps, he muses, a primitivist-inspired lifestyle is exactly what we need.

"A lot of people are questioning their modern society and the way we're living this fast-paced life," Mr Poad said.

"Two per cent of our genome is made up of Neanderthal DNA so it's something that's still within us. We have lost track of that connection, but there's definitely a movement back to regaining it."