Putting the lid on plastic waste 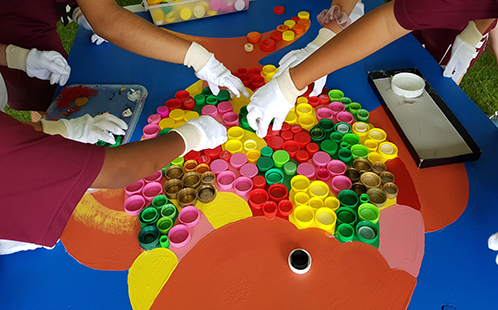 How we deal with plastic waste is becoming an increasingly important issue for our communities. Plastic lids are particularly problematic as they are too small to be collected and processed in regular recycling facilities. To illustrate the scale of the problem, and its impact on the environment and marine life, Western Sydney University student and ecowarrior Naomi Kroll founded The Plastic Lid Project.

Naomi collected more than 20,000 plastic lids from around the university’s campuses. “We had 5,000 people help collecting them which was a massive effort and a great example of community action. We collected so many lids I didn’t know where to store them!”

Once she reached 20,000 plastic lids (and truly exhausted her home’s storage spaces), she created a beautiful artwork with the materials resembling a giant turtle, called ‘Drowning in Plastic’.

“Turtles are particularly at risk from plastic waste polluting our oceans, as they mistake floating plastics for food”, she said.

Children get creative at the Youth Eco Summit

“We received great feedback from the teachers, many of whom took an art plan so they can do a plastic lid art project with their class. The children said they had a lot of fun and got really engaged”, said Naomi.

The Plastic Lid Project previously exhibited at the Penrith Real Festival, and Naomi also recently presented on her work during the recent Asia Pacific Youth Summit which showcased impressive initiatives from across the region relating to the United Nation’s Sustainable Development Goals.

More than 28,000 people have been exposed to the project so far.