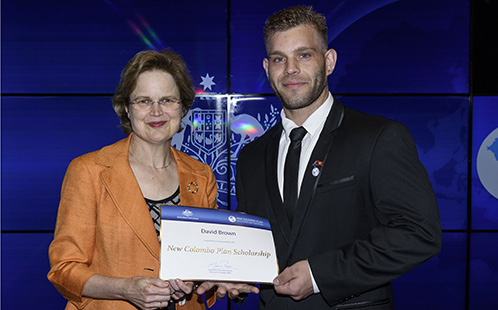 Western Sydney University health science student, David Brown, has been announced as a 2019 New Colombo Plan Scholar, enabling him to study a Master of Teaching at the City University of Hong Kong and Hong Kong Baptist University.

The 25-year-old, who will spend 18 months in Hong Kong as part of the Plan, is one of 125 new recipients who will live, study and learn in 24 host locations across the Indo-Pacific region next year, after receiving the prestigious Australian Government scholarship.

David, who is the first in his family to attend University, completed a Diploma at Western Sydney University’s The College, with his great marks and hard work setting him up for success in the Bachelor of Health Science.

The New Colombo Plan will also see him intern for six months at a local high school where he will educate teenagers in applied health science, and participate in a language program where he will learn Cantonese and Mandarin.

David received his award at a special ceremony at Parliament House from the Minister for Foreign Affairs, the Hon Marise Payne and Minister for Education, the Hon Dan Tehan MP.

Excited to expand his knowledge of health and teaching beyond Australian culture, the Blacktown resident believes there is much to learn from neighbouring countries with different strengths and challenges.

“Countries within the Indo-pacific region are very much our neighbours and by understanding the processes within these countries across all fields, myself and my peers will create stronger relationships.

“I’m eager to see how the local communities apply knowledge of health to students in comparison to Australia.

“I’m also personally intrigued by the culture in Hong Kong and how their lifestyle in such a highly densified area has put them at the top in terms of life expectancy worldwide,’ says David.

The New Colombo Plan, now in its fifth year, is an initiative which aims to increase awareness of the Indo-Pacific region by providing students with opportunities to study and work abroad.