Honey, I hid the kids: Australia’s screen industry is letting down carers

The following opinion piece, co-authored by Dr Sheree Gregory from the School of Business, was first published with full links on The Conversation(opens in a new window).

Women in Australia’s screen industry are finding it difficult to juggle their working lives with their caring roles, according to our study released today.

I have been careful to not mention my child [at work]; pretending not to have a child.

This sums up what many workers conveyed to us about the current work-care dynamics in the industry and the lengths women go to in order to hide their status as parents. It says something of the disapproval that parents and carers feel – both sharply and painfully.

The report also reveals that 73% of respondents find it difficult to impossible to vary their work hours or access the amount of payment needed for caring support. Given 60% of carers are freelance or self-employed, it’s not surprising that long hours, financial uncertainty and unpredictable paid work commitments are major concerns.

Parents and carers in the Australian screen industry are acutely aware that the current work culture is unfriendly towards caring.

One respondent said they “have been overlooked for a role where it was expected that I couldn’t do the hours” (rather than anyone asking me before offering it to someone else).

Another commented: “Returning to work after time off for babies is slow. Even though I can work full-time, employers are reticent to offer me full-time roles because I have small children.”

There has been a swift response. The South Australian Film Corporation today announced new measures to address the impact of caring on film workers.

These responses are all in line with our report recommendations.

Compared to the invisibility of mothers behind the screen, one man experienced the opposite. Paradoxically, his caring status helped his career:

I swear I get some gigs with repeat clients just so they can hear about or catch up with my son. He is a pretty awesome kid. Has also made many appearances on sets and gets taken seriously as being helpful and intelligent from a pretty young age. 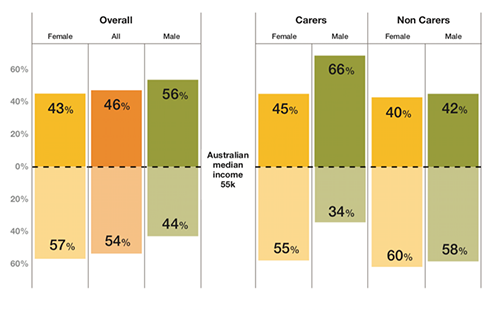 Working parents and carers taking the survey identified long and inflexible hours, typical of the screen industry, as their key challenge. This confirms findings from previous reports, including a UK survey that this Australian study was adapted from. This UK report yielded similar responses, with 79% of carers saying they fared badly compared to non-carers.

We suggest a number of policy recommendations to help address the unwritten rules that hide parenting and caring in the screen industry. These include:

Households wrestle with the challenge of balancing work and care, often by crafting their own private solutions. Our survey and report recognises this is a problem that is best solved by employers and industry decision-makers who are in a position to make change happen at the broadest level. Households and workers know this and are calling out for support from policymakers.