The following opinion piece by Dr Ian Wright from the School of Science and Health, was first published in The Conversation (opens in a new window). 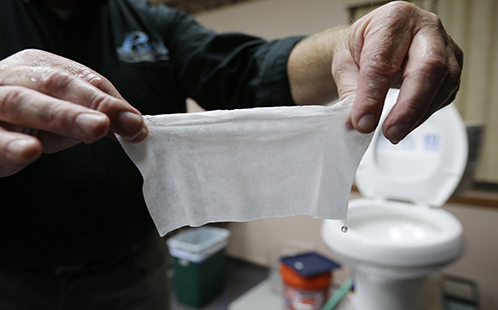 The manufacturer of White King “flushable” wipes has been fined A$700,000 because these are not, in fact, flushable. The wipes, advertised as “just like toilet paper”, cannot disintegrate in the sewerage system, and cause major blockages.

The Federal Court found Pental Products and Pental Limited, which manufacture the wipes, guilty of making false and misleading representations. In particular, Pental claimed that the wipes would break down in the sewerage system, like toilet paper does.

So-called flushable wipes, now sold for everything from make-up removal to luxury toilet paper, are a growing hazard to public health. Sydney Water says 75% of all sewer blockages in the city’s waste-water system involve wipes.

Don’t trust the label
While wipes might look a bit like toilet paper, there are major differences. Wipes are made from a very tough material called “air-laid paper”, and are often impregnated with cleansing chemicals, disinfectants and cosmetic scents.

Air-laid paper behaves very differently in sewers to toilet paper and does not readily disintegrate in water.

When in sewer pipes the resilient wipes have a tendency to entangle with other wipes and create blockages. This is a bit like the knot of tangled clothing sometimes found in the washing machine. Sewerage system managers around the globe seem powerless to prevent the problem.

Sewer blockages caused by wipes look grotesque. Unpleasant work in confined places is required to remove the blockages (some of which is done by hand!). In 2016 Newcastle’s Hunter Water removed an ugly seven-metre snake of wipes and assorted sewage debris, weighing roughly a tonne, from its sewers.

Wither do you wipe?
Wipes become very popular in the 1990s to help in cleaning babies’ bottoms while changing nappies. Since then, many similar products (“wet wipes”, “baby wipes” and “face wipes”) have proliferated well beyond the baby aisle.

Wipes may be advertised for personal hygiene, removing makeup and cleaning hands. Others are marketed for cleaning bathroom surfaces, toilets and other household areas. The marketing of wipes often boasts how easy they are to dispose by simply flushing them down the toilet.

More recently, a booming adult market is expanding their use as a luxury alternative to toilet paper, buoyed by endorsements from celebrities like Will Smith and Will.i.am. Research by Sydney Water found that males in the 15-44 bracket particularly preferred to use wipes rather than toilet paper. The same market survey estimated that a quarter of Sydney Water’s 4.6 million customers flush wipes down the toilet rather than putting them in a bin.

The three Ps
The fine imposed on Pental Products and Pental Limited for their “flushable” wipes is an important signal to others in this growing market.

However, wipes are not the only waste item that people should not flush down the toilet. This issue gained international notoriety in 2017 when Thames Water in London removed a 130-tonne monster sewer blockage, in a difficult and laborious three-week operation. The blockage was an accumulation of solids called a fatberg – a nightmarish combination of wipes, congealed fat, nappies, female sanitary products, and condoms.

Have we forgotten what toilets are for? The Australia Water Association reminds us that they are for the three Ps: pee, poo and paper (toilet paper only).

Perhaps people should visit an Irish website called think before you flush. It lists other common waste objects that should not be flushed, such as cigarette butts, cotton buds, dental floss, hair and unwanted medication. It also advises that a bin be placed in each bathroom.

Hopefully, packets of wipes will now carry warning labels to advise users not to flush them down the toilet. Just because you can flush something down the toilet does not mean it is good for the environment or society to do so.