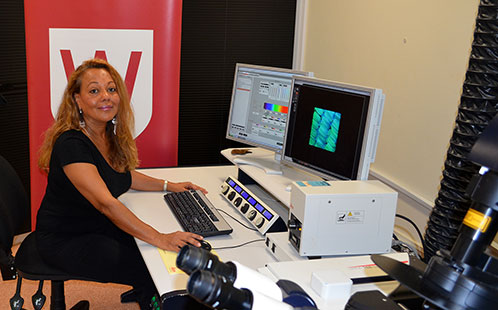 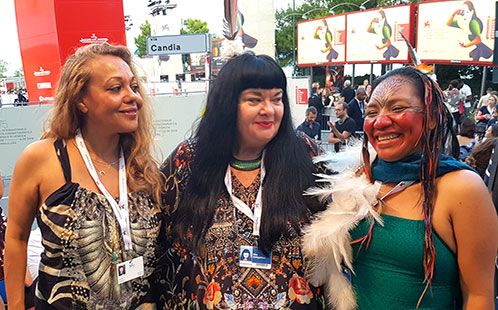 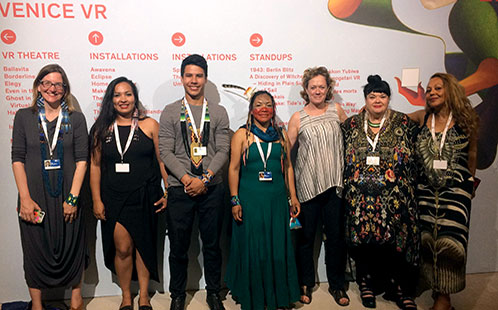 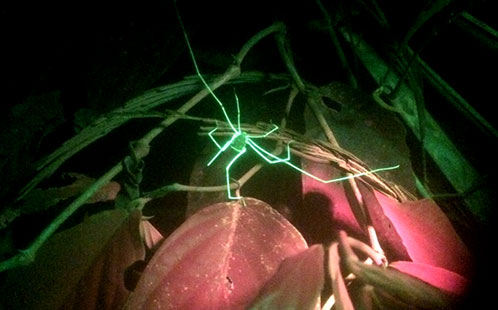 Awavena is a critically-acclaimed virtual-reality (VR) experience that tells the inspiring story of Hushahu, the first female Shaman in the Amazonian tribe of Yawanawa. The film has played to astounded audiences around the world, including at the recent Venice International Film Festival, Sundance Film Festival and at the World Economic Forum in Davos to world leaders. It recently finished touring at Carriageworks in Sydney and blends immersive virtual reality and augmented re-ality with innovative cinematic techniques to showcase this powerful story from the Amazon.

The film was made by Director Lynette Wallworth who drew on Dr Anya Salih’s expertise in fluorescence and confocal microscopy to create 3D imagery of forest creatures and specimens from the Amazon. Dr Salih served as Scientific Advisor for the film and travelled to the Amazon with the re-nowned filmmaker and Emmy award-winning artist and director Wallworth, with Producer Nicole Newnham and a team of expert cinematographers and sound recordists.

Wallworth, who has employed Dr Salih’s research in her works since 2001, is renowned for using cutting edge technologies to create stunning immersive and mixed reality works. In Awavena, Wallworth  brought together specialists in such technologies as live action 360 video, photogrammetry and volumetric capture to image the Yawanawa community. A portable Lidar scanner was employed to map in detail the Ya-wanawa forest. All this equipment was transported over vast distances, in planes, cars and canoes to the Yawanawa village, deep in the Amazonian forest.

The film captures Hushahu’s journey as the first female Shaman trained by 100-year old Tata, the Yawanawa Shaman. Tata foresaw the emerging changes in the Amazon’s future and that of its people, ecosystems and life, and sought to ensure that power was shared with women as a means of safeguarding future of Yawanawa. Hushahu’s journey to become the Yawanawa’s first woman shaman is visualised in VR as a way to immerse audiences in the Yawanawa’s enduring relationship with their forest.

Dr Anya Salih was brought in to provide scientific guidance and advice on capturing the bioluminescence and fluorescence in the Yawanawa forest - the light emitted by plants and many creatures in the dark. Hushahu’s Shamanic visions involved a luminously glowing world that Wallworth wanted to depict using a variety of techniques including Lidar. Dr Salih speculated that there may be hitherto unknown fluorescent species in the rainforest whose discovery might benefit both her research and the Yawanawa tribe.

Indeed, her speculation proved correct and with her guide Anubi, Dr Salih was able to locate and map many new species of fluorescent insects- a process the Yawanawa will continue to persue. Like stars, stunningly glowing insects, were found to be everywhere among the leaves that fluoresced in red and green, transforming the night-time forest into an Avatar-like fluorescent landscape. When she brought the glowing insects back to the village, there was tremendous excitement from Yawanawa who had seen such colours in their visions but never via these technologies.

Dr Salih also used confocal scanning to image the tiny scales of the iconic blue Morpho butterfly central to Hushahu’s visions. Animations of the butterfly were generated into an augmented reality app triggered by a beaded bracelet created by the Yawanawa women so that audiences could ‘see’ the butterfly flap its wings on their wrists.  The bracelet uses data from NGO Imazon to reflect forest health in the appearance of the butterfly’s wings.

Lynette Wallworth’s #Awavena #MixedReality display @Davos was brilliant showcase of how #AR and #VR can be used for #climatechange awareness - in this case bracelets from #Yawanawa shows live health of Amazon rainforest #AugmentedReality by @blippar creative by @Technicolor pic.twitter.com/G7WdLABY8s

“Lynette’s goal was to capture the magic of the Amazon and its people through innovative technologies and storytelling that immerses audiences in the challenges of change being experienced by the Yawanawa people. Awavena created a  portrait of the Yawanawa forest as well as  recreating their spiritual visions, taking the audiences into their world. But their world is under threat – from climate change and destructive mining and logging of their forests. All around the world, ecosystems are under threat and collapsing and it is now that the traditional wisdom and deep knowledge of the indigenous people, as Yawanawa, can help us gain a better and deeper understanding of the planet", explains Dr Salih.

"I was immensely privileged to be invited to join Lynette’s team, to visit Yawanawa and to draw on Western Sydney University’s advanced microscopic imaging facilities to help take the Amazon story to the world in a film that wowed audiences at the World Economic Forum in Davos, at the Sundance Film Festival and in Sydney”.

Finding new ways to engage audiences in understanding and reacting to urgent issues such as climate change and the changing stories of tribal communities is essential. Use of Virtual Reality and new multimedia storytelling techniques can help audiences empathize with stories that connect environmental changes and the stories of people. Awavena was created at the invitation of the Yawanawa community and Chief Tashka and wife Laura Soriano Yawanawa are co producers of the work.

Taking a positive step in engaging and empowering millennials and their communities with the issues of a changing climate, Western Sydney University has launched a new awareness campaign Earth IQ. Through multimedia storytelling, expert commentary and activations, Earth IQ is a way of inspiring a generation to embrace more mindful and sustainable living - one carbon footprint at a time.

Find out more at www.facebook.com/EarthIQ/ or follow the conversation using #EarthIQ