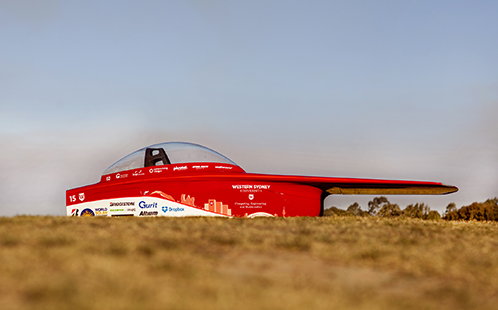 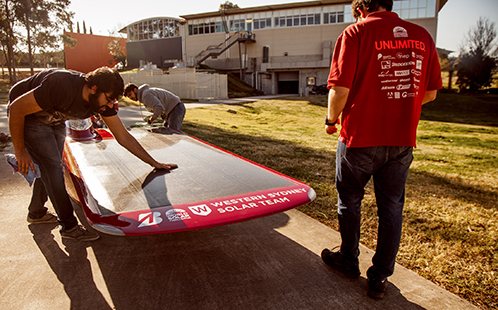 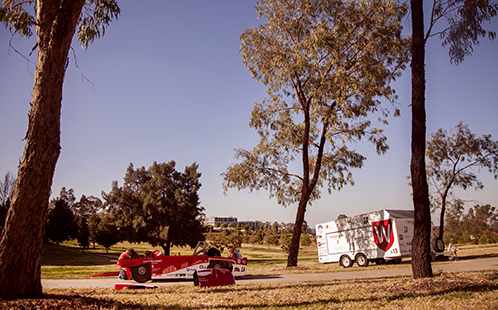 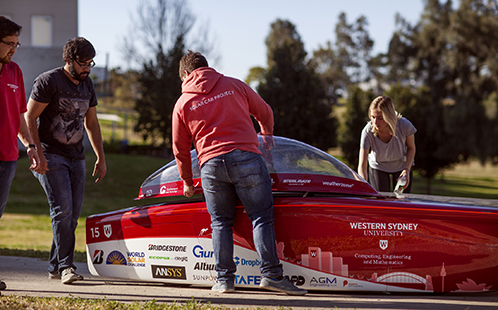 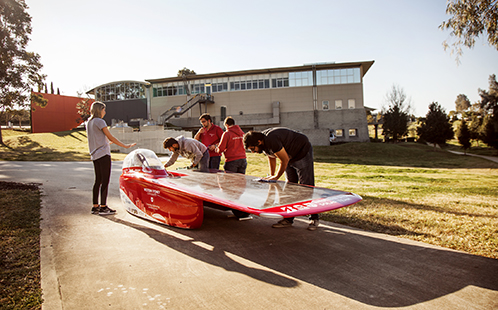 Photo Gallery (click on the image to view the gallery)

Western Sydney University has unveiled its bold, new solar car – which is sure to turn heads at the 2017 Bridgestone World Solar Challenge (opens in a new window) in October.

The new 'UNLIMITED 2.0' took prime position on the lawn at the University's Open Day on Sunday, and was officially launched at a special event on the Parramatta South campus last night.

Project Lead Saami Bashar says, after months of hard work, anticipation and intrigue, the University's School of Computing, Engineering and Mathematics and the Solar Car Team are proud to finally unveil UNLIMITED 2.0.

"The team have kept tight-lipped on the details of our new solar car for as long as possible, to maintain our competitive edge in the World Solar Challenge," says Saami.

"It is exciting to finally unveil to the wider University community, as well as all of our sponsors and supporters, the final result of all of our hard work."

With its compact, narrow chassis; long, pointed nose; shortened rear and pearlescent paint, UNLIMITED 2.0 appears to hover over the ground like an arrow – poised and ready to shoot.

"Our aim this year was to build the fastest car we possibly could, to put everything we have into this car to challenge for first position," says Saami.

"Our main design philosophy was to generate a very organic body shape. We've managed to eliminate the rear overhang and make the fairings much shorter and narrower, while still maintaining enough space to squeeze in the driver, mechanics and electronics.

"The design was certainly challenging – our team have been pushed to their limits, working up to the wire continually re-evaluating and redesigning the braking, suspension and battery systems to make optimum use of space and remove any unnecessary weight." 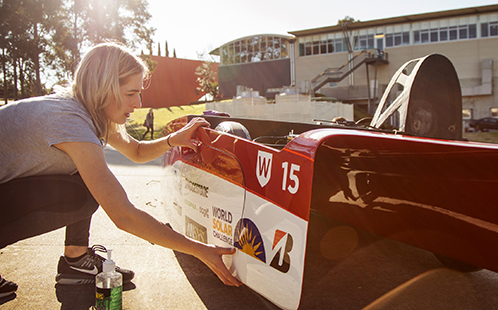 Grace Mitchell, the Graphics Design Lead for the team, says another departure from the previous cars was the use of paint on the exterior of UNLIMITED 2.0, compared to vinyl wrapping used in the past.

"Paint provides a much smoother surface, which allows the car to slip through the air with minimal disturbance. We are so pleased with the result of the paint job. The pearlescent gloss finish is stunning."

Also unveiled for the first time at Open Day and the launch event, was the graphics on UNLIMITED 2.0 – which Grace designed. Emblazoned on the vehicle, alongside the logos of the University and the team sponsors, is a graphical representation of the Sydney skyline.

"In the design, we have included the iconic Sydney Opera House and Harbour Bridge, as well as the Three Sisters rock formation in the Blue Mountains. Nestled in the middle is a Western Sydney University building," says Grace.

"This design was really important for us, because the World Solar Challenge is such a large, international competition. We wanted to give our audience and competitors some context, for who we are and where the University is placed in the wider Sydney region." 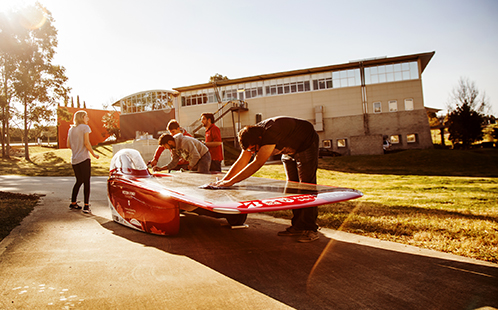 Saami Bashar says UNLIMITED 2.0 will help to ensure that the Western Sydney University Solar Car Team is not overlooked as a real contender in the 2017 Bridgestone World Solar Challenge.

"We've worked very hard to refine our design. Every minute detail has been thoroughly examined and iterated upon, to produce a car that is lighter and far more efficient," says Saami.

"Other teams are sure to notice some of the smaller details of the car – such as the braked carbon motor frame or the combined trailing edge – which hints at the pride with which we undertake our work, and how serious we are about this competition.

"We can't wait until the car is finally on the long, straight road to Adelaide – and we look forward to crossing the finishing line in first position."

To request updates on the progress of the Western Sydney University Solar Car Team in the 2017 Bridgestone World Solar Challenge, email media@westernsydney.edu.au.

2017 marks the third time that Western Sydney University have participated in the biannual 2017 Bridgestone World Solar Challenge (opens in a new window) – which involves a 3,000km drive from Darwin to Adelaide using only solar power.

In 2013, Western Sydney's inaugural year, challenging weather conditions and mechanical issues led to the original vehicle, 'SolAce,' being towed for a short time on the road to Adelaide. Despite these trials, the team finished in the top half of their class.

In 2015, the team ramped up their efforts and their increasing skill and confidence was evident in the design of its second vehicle. 'UNLIMITED' crashed after a suspension failure but was speedily repaired and crossed the finishing line in tenth place out of 43 teams out on the field.

In 2017, the team is a more experience, professional unit and has learned from the experiences of SolAce and UNLIMITED. The team have shaken off their underdog status and UNLIMITED 2.0 is thought to be a top contender in the race.

The 22 member Solar Car team is comprised of students from the fields of Engineering, Industrial Design and Visual Communications. The students manage every aspect of the production and design of the vehicle, as well as sponsorship, marketing and the administrative elements of their involvement in the Challenge. The team is supported by the University's School of Computing, Engineering and Mathematics (SCEM). 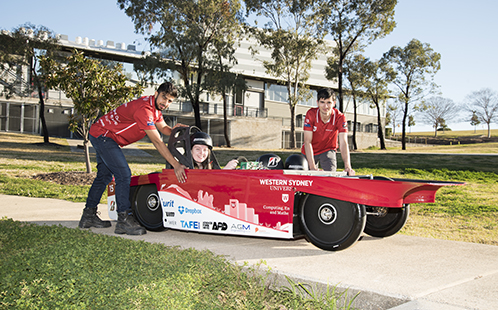 After months of simulations, trials and test drives, the Western Sydney University Solar Car is primed and ready to race through Australia's red centre. Meet the Solar Car Team members who will be in the driver's seat. 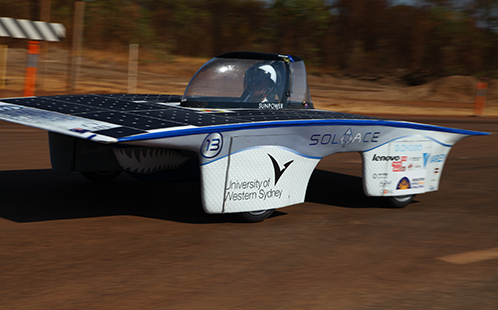 The evolution of the Western Sydney University solar car

The original solar car – 'SolAce' – measures 4.5 metres in length and 1.6 metres in width. The 300kg carbon-fibre vehicle featured a CSIRO in-wheel motor, giving the vehicle a theoretical top speed of 150km per hour. 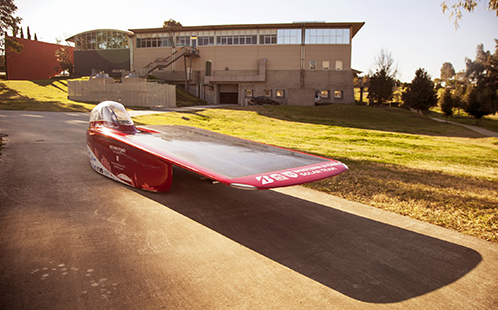 It is exciting to finally unveil to the wider University community, as well as all of our sponsors and supporters, the final result of all of our hard work. 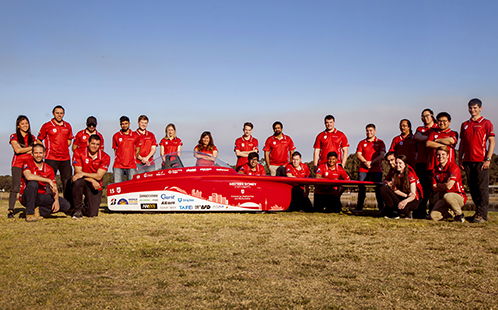 The 22 member Solar Car team is comprised of students from the fields of Engineering, Industrial Design and Visual Communications. The students manage every aspect of the production and design of the vehicle.