The following article by Dr Keith Parry, Dr Aila Khan and Blair Hughes from the School of Business was first published with full links in The Conversation.(opens in a new window)

As new anti-scalping laws are introduced in Victoria, our research suggests that frustrations with current ticketing systems may be a contributing factor to the continued success of scalpers. But new technologies are on the horizon that will help.

Scalping is the practice of buying event tickets and then on-selling them at a higher price. Our research found that one in five fans surveyed had at some time purchased tickets from scalpers globally, with males more likely to engage in this behaviour.

We surveyed fans from Australia, New Zealand, North America, and the United Kingdom, 19% of whom admitted to purchasing tickets from scalpers. In addition, almost 30% had used third-party re-seller websites (such as Viagogo).

These figures can be partly explained by frustrations among fans with the current ticketing systems - as well as the increased sophistication of scalpers.

In past decades, ticket scalpers were a common presence around venues, selling tickets on the day of the event to anyone who turned up without one. Yet the development of online technologies has transformed the secondary ticketing market into a multi-billion dollar industry.

Increasingly, sophisticated computer programs (robots or “bots”) can make multiple, repeated requests from ticketing company websites in seconds - at the expense of the average fan. Third party ticket resellers may then charge as much as a A$37.50 booking fee and a A$4.95 handling fee on top of an inflated or inaccurate ticket price.

In Victoria, amendments to the Major Events Act will see fines of up to A$475,000 for anyone selling tickets “at a price greater than 10% above the original sale price of the ticket”. In Queensland, it is illegal to resell or buy tickets at more than 10% above the original ticket price, while in New South Wales it will soon be an offence to resell tickets at more than 10% of the original sale price. Significantly, the updated NSW legislation will also outlaw the software that has enabled bots.

In remains to be seen how effective these new measures will be.

Established anti-scalping laws in the US have had little impact on the secondary ticket market. Scalpers adapt their methods and find ways to feign compliance with legislation. More importantly, some fans will go to any lengths to watch their team play.

How satisfied are fans?

Many cited the ease of purchasing tickets online and the ability to select a specific seat as important factors. Being able to buy tickets at the first attempt is generally linked to greater satisfaction with the purchase experience.

There were some significant differences in satisfaction depending on how tickets were purchased. Although fans suggest that they enjoyed being able to purchase tickets online, they were more satisfied when they bought tickets from a box office or at the venue. 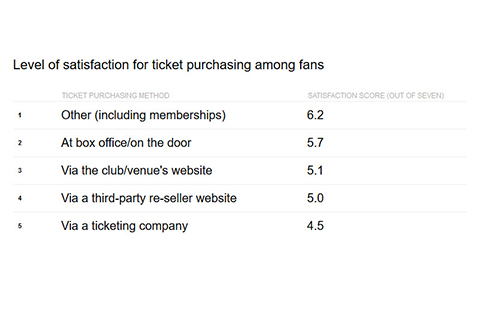 For anyone who has recently purchased a ticket to a major event, the areas of dissatisfaction may be unsurprising. Respondents cited factors including booking fees being added to the cost of the ticket (also known as drip pricing), having to pay printing costs, inflexibility of seating options, and poorly functioning websites among their key complaints.

As noted above, complaints about ticketing websites were common. Fans cited “congested websites”, “servers [that] can’t handle the volume”, and “getting beaten for tickets by bots” as reasons why they could not buy tickets. If legislation alone can’t stop scalpers, new approaches to ticketing may be required.

Internationally, there have been some interesting developments amongst teams, venues and ticketing companies that may eliminate scalping and improve the ticketing experience. It may not be long before all fans can take advantage of innovations such as mobile-only tickets, biometric access, and even microchipped tickets.

The Miami Heat became the first NBA team to ditch paper tickets, switching to “mobile-only” ticketing. They cite the convenience and simplicity of managing tickets as well as providing fans with guaranteed ticket authenticity as reasons for this change.

Also in the US, there are now seven Major League Baseball stadiums that offer a biometric fingerprint scanning program which enables “frictionless access” to the venue, creating a faster and more exclusive fan experience.

Argentine football club Tigre went further in 2016 and launched a new ticketing scheme that allowed fans to be microchipped with their season pass. These implantable ticketing microchips proved to be popular amongst die-hard fans.

Some ticketing companies are also investing in technology aimed at combating scalping. Ticketmaster US have created a “Verified Fan” program that allows fans to be verified before the tickets come on sale to speed up the process.

A number of start-ups are looking to challenge existing ticketing process and stop touting. Companies to look for include:

Citizen Ticket: Billing itself as an “ethical service”, this company ensures that all transactions are recorded publicly and permanently. Their ticket delivery system, called BitTicket, allows the life cycle of a ticket to be tracked, eradicating touts, fraud, and unregulated resale.

ShieldSquare: Dubbed the “bot police”, this company is one of the pioneers in bot mitigation, blocking ticket bots and encourage genuine ticket buyers.

Ticketmaster Presence: Paper tickets are replaced with digital passes using proximity-based technology to enable a “tap and go” venue entry system. Smart devices, such as a phone or a watch, are used to enter the venue.

The future of ticketing is paperless

Looking to the future, it may not be long until tickets are physically linked to individuals and our iconic sporting venues are accessed with the swipe of an appendage.

In such a world, paper tickets will become a thing of the past. One cannot feel that something is lost without the physical memento of a sporting event provided by a ticket stub. The scalpers and bots have much to answer for.