The art of conversation with the Second Lady

The following article was written by Dr Catherine Camden Pratt, Lecturer in Art Therapy from the School of Social Sciences and Psychology at Western Sydney University 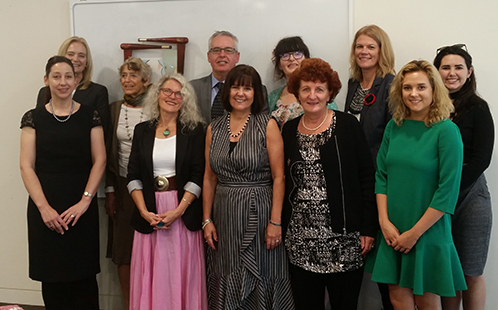 The Second Lady of the United States, Karen Pence, has made it her personal project to advance the cause of Art Therapy and raise the profile of the profession – and she used her visit to Australia last week as an opportunity to continue her mission.I have worked with creative arts in education, research and social change for over 30 years, more recently as an Art Therapist in my own clinical practice and as a lecturer at Western Sydney University which commenced its Master of Art Therapy program in 1993.

When I received the phone call inviting me to meet with the renowned art therapy advocate – who just so happens to also be the wife of United States Vice-President Mike Pence – as part of a small round table of Art Therapists and their allies, I experienced a range of thoughts and emotions.

This has to be a scam! Why me? This could be a great opportunity for Art Therapy. Woah, what about the political complexities?

Art Therapy is a relatively new profession in Australia beginning here in the 1950s with collaboration between artists and psychiatrists. It has a robust professional association, the Australian and New Zealand Art Therapy Association (opens in a new window)(ANZATA). (AZATA President Dr Jo Kelly also attended the meeting.) Despite its increasing recognition as an effective therapeutic modality across many contexts and populations, Art Therapy as a profession lacks visibility.

Karen Pence's advocacy for the profession is a point of division (opens in a new window) for many Art Therapists in the US, and possibly for some in other parts of the world including Australia. While she has raised its profile, questions remain about the politics of discrimination of the Trump administration that affect the lives of many of those who seek art therapy, as well as questions about her own views that marginalise specific communities.

Deciding to say 'yes' to the hour long round table was a process.

My biggest concern was – and remains – a political one. How do I meet with someone whose political views I fundamentally disagree with?

Yet to refuse is to be invisible; to not be part of the conversation. To refuse is to say I cannot talk across difference, that I am closed off, incurious about others' views. Saying 'yes' meant I needed to find ways to be strategic in how I participated as well as be mindful of the local and global Art Therapy profession.

So what would be my strategy?

First of all, I decided to wear pink, a small yet political act aligning me with voices of resistance to the Trump administration.

I emailed colleagues in the US to talk about the issues. What was it I most wanted to say about Art Therapy in this specific context? That Art Therapy cannot be separated from the social context which is itself political, from human rights and how power is practised, how political economy shapes services and their capacities to respond, and most importantly how through the social context, through politics 'we' are each implicated in the lives that bring people into art therapy.

While I could – and did – talk about my own work (opens in a new window) with clients and in the Master of Art Therapy program at Western Sydney University, I wanted to find a way to at first open the political part of the conversation through art.

I took along and spoke to a painting of mine, one in a series exploring the long term impact of child sexual assault and its links with domestic violence. Looking at the painting you – including politicians, Art Therapists and Art Therapy advocates – are immediately implicated in it, through your reflection in the mirrors you become part of its story. How you then act is a choice. One of my intentions here was to address Karen Pence's views expressed in the media that she cannot influence policy, this being somewhat contradictory to her views that she influences her husband's views. What choices you/ Karen Pence/ I /Art Therapists make in the story are crucial and do have impact. They are political. 'In the name of the father'. Acrylics, oils and mixed media on canvas with frame of broken table.

Talking about my painting enabled me to talk about politics to say what I most wanted to say – that art therapy is a political act and cannot be separated from its social and political contexts. For example, how current funding for relevant services is being reduced even as political rhetoric around Domestic Violence increases.

Karen listened attentively as she did to each of us, engaging in conversation and demonstrating genuine interest in our work and ideas. After our roundtable I noticed one of Karen's daughters – both of whom were present – taking a photo of my painting, placing herself in the story through her reflected gaze.

This was a heartening moment. Witnessing this one small act instilled a hope about ways in which my participation in this meeting, and in the broader conversation, can make some small difference.