Out of the Navy and into Tourism: Student’s potential recognised 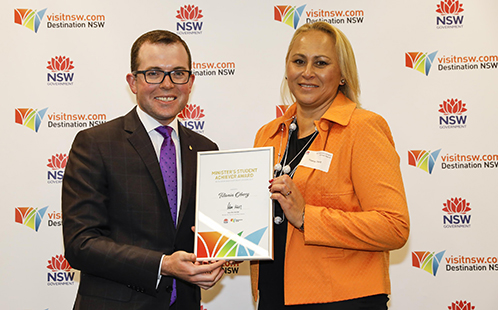 From serving in the Navy to teaching English in Tonga, Titania Oberg has now been awarded the 2017 Minister’s Achiever Award for her outstanding academic performance, after she enrolled in university as a mature age student to study a Bachelor of Tourism Management.

The awards ceremony was held at NSW Parliament House where the State’s next generation of world-class tourism professionals were recognised. Minister for Tourism and Major Events and Assistant Minister for Skills Adam Marshall congratulated Titania on her accomplishments in her studies.

“The students honoured represent the future of tourism and hospitality, and embody the commitment to excellence that is critical to the continued success of our industry,” Mr Marshall said.
To be eligible for the award, students must have a record of sustained academic achievement and possess personal qualities required to make a significant contribution to the industry.

Before choosing to study at Western Sydney University, Titania served in the Royal Australian Navy for 12 years and after, lived in Tonga for six months where she taught English. She says it was her love of travel and her organisational skills that led her to study tourism.

“I organise all the travel for my family and church group and I have travelled myself, so I decided to study and learn more about tourism, since I enjoy doing it so much,” says Titania.

Titania’s university placement with Lido Group, who organise corporate and government accommodation, as well as working for Abercrombie and Kent has helped build her experience.

“I was so humbled to receive the award because I know there are a lot of people studying the degree who work hard— to be recognised is an honour,” she says.
Titania credits the calibre of the teaching staff at Western Sydney University who supported her throughout her degree.

“My teachers are very willing to spend time outside of lectures to discuss anything and everything and impart their knowledge which is something that I am very appreciative of,” she says.

Dr Julie Wen, Academic Course Adviser for the Tourism management degree, nominated Titania for the award after seeing her potential and commitment to her studies.

“Titania brings her experience in the navy to her tourism studies, and makes outstanding contribution in class discussions about developing sustainable tourism that promotes heritage value and local participation in global tourism prosperity,” says Dr Wen.