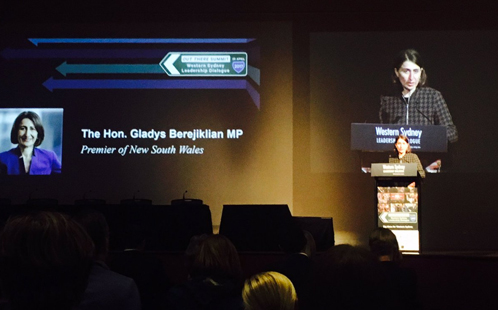 The NSW Premier Gladys Berejiklian and Opposition Leader Luke Foley have told a conference at Western Sydney University that the region requires considered and long-lasting investment to fully capitalise on its extraordinary potential.

Organised by the Western Sydney Leadership Dialogue, the Out There conference was held on April 28 at Western Sydney University's Parramatta South campus.

Delivering the Lachlan Macquarie address, the NSW Premier Gladys Berejiklian told the audience that Western Sydney is the heartbeat of the state, and new investments in the region, particularly in public transport, are improving the lives of local communities.

The NSW Opposition Leader Luke Foley nominated education as his highest priority for the region, and pursuing an unprecedented schools building program.

The Chair of the Western Sydney Leadership Dialogue Christopher Brown says the conference was designed to bring together experts from government and private sectors to debate the region's key issues.

"With our population set to explode over the coming decades, Out There 17 looked beyond today's 'catchup' philosophy to encourage key stakeholders, opinion leaders and decision-makers to debate how their future plans will cater for tomorrow's generation," he says.

Speakers at the conference included:

The Western Sydney Leadership Dialogue is a non-partisan, not-for-profit initiative designed to engage the community in a productive discussion about Western Sydney.