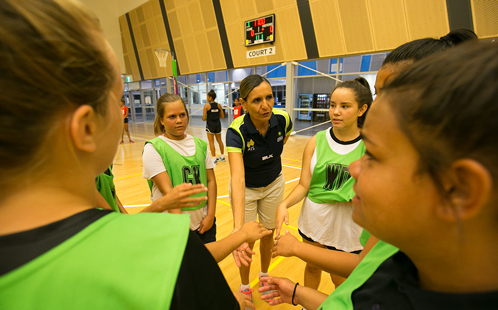 Western Sydney University is co-hosting a workshop with Netball NSW and Netball Australia to provide coaching accreditation for Aboriginal and Torres Strait Islander netballers looking to further their careers and continue giving back to the community.

This event will take place at Sydney Olympic Park on Sunday August 6 and the day will include a Foundation netball coaching accreditation, mentoring and leadership workshops, as well as other learning opportunities around topics such as nutrition and mental health training.

"Aboriginal and Torres Strait Islander coaches have a profound impact on the lives of athletes within and beyond the sports ground," says Dr Andrew Bennie, Director of Health and Physical Education at Western Sydney University.

"Our collaborations with Aboriginal and Torres Strait Islander coaches showed that they valued the role of the coach and took on coaching roles because they wanted to give their athletes the kind of encouragement and support they had received from their mentors, while also helping foster pathways into coaching roles."

Sonia Gouveia, Community Engagement Manager at Netball NSW, said the organisation was delighted to be involved with the workshop.

"Netball is all about inclusion and helping ensure that there are equal opportunities for everyone. That's one of the key reasons for our involvement in this workshop," she said.

"Working with Aboriginal and Torres Strait Islander communities and helping them excel in coaching and leadership environments is a really important part of our community strategy and Sunday is another part of that.

"The Indigenous Netball High-Performance Camp at the Australian Institute of Sport in July received some fantastic feedback and Netball NSW were keen to build on the momentum of this."

"We are really looking forward to what promises to be a wonderful day of learning and development for everyone involved."

In addition to the coaching workshop, researchers from Western Sydney University, Macquarie University, and the University of New South Wales will carry out a formal evaluation of the coach accreditation day to help ensure this event, and similar initiatives, are custom built with Aboriginal and Torres Strait Islander coaches to ensure they determine the support they need to become sporting leaders in their communities.

For more information about the initiative, please contact Andrew Bennie.