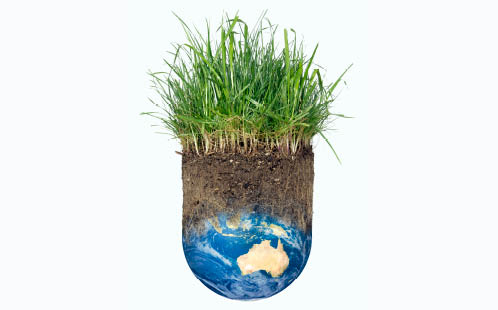 As a 'Future Fellow,' Dr Scott Johnson from the Hawkesbury Institute for the Environment (HIE) (opens in a new window) will receive more than $900,000 in funding from the Australian Research Council to conduct the 'Time to prime: Using silicon to activate grass resistance under higher CO2' project.

"I am increasingly being contacted by farmers who are frustrated by herbivore insects, such as chafer grubs and scarab beetles, that are destroying pastures from the ground up," says Dr Johnson.

"I have been sent photographs from farmers and agronomists, showing that they can grab their grass and roll it back like a door mat because these insects have completely severed the roots from the stems." 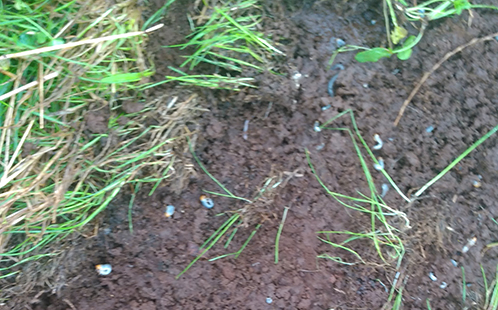 An agronomist provided Dr Johnson with this photo, of soil that can be "rolled back like a door mat."

Dr Johnson says grasses draw silicon from the soil. The silicon is used to coat their plant tissues and triggers a natural defence against root-eating insects. However these defences are being compromised for two reasons:

Increased carbon availability, arising from elevated CO2, often causes many plants to switch to carbon-based defences – which are often ineffective against root herbivores.

Increased CO2 is widely reported to supress the Jasmonic Acid (JA) signalling pathway in plants – without which, the grass cannot mount a silicon defence.

As part of the innovative, ARC-funded project, 3-4 metre wide open-top chambers will be built in order to house the grass. The environments will then be enriched with CO2 and silicone.

"For insects, grasses that contain large amounts of silicon are unpleasant to eat. It would be similar to eating an ice-cream with a thick outer coating of sand," says Dr Johnson.

"This research will explore the benefits of counteracting the rising levels of CO2 by introducing the natural, environmentally-friendly supplement to the soil. We will also introduce root herbivores to the environments to test their impacts."

Dr Johnson says the research team will use an innovative method of introducing the silicon – which needs to be in a soluble form in order to be absorbed by grass. 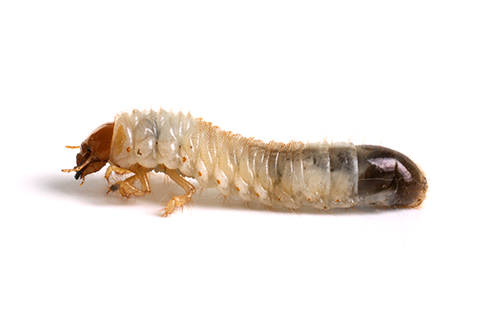 The chafer larve, a root-eating herbivore that is devastating Australian grasses.

"The silicon will be introduced to the soil in granular form, using slag – which is the by-product produced by steel furnaces. Slag is a rich source of silicon and it's in plentiful supply. A single Australian still mill can produce more than a million tonnes of slag every year – making it an easy resource to come by," says Dr Johnson.

'Time to Prime' is the latest in a wide range of Hawkesbury Institute for the Environment (HIE) research projects that are investigating the ways that ecosystems respond to environmental changes, such as reduced or increased rainfall, temperature and CO2 levels.

HIE is home to EucFACE – the Eucalyptus Free Air CO2 Enrichment experiment – a unique multimillion dollar facility which is investigating how the Australian bush will react to the inevitable increases in atmospheric concentrations of carbon dioxide.

Acting Chief Executive Officer of the ARC, Ms Leanne Harvey, has said that – as one of only 91 ARC Future Fellows announced (opens in a new window) in 2017 – Dr Johnson's research is in an area of "critical national importance."

"These new Future Fellows are awarded to outstanding mid-career researchers, who will now receive funding support totalling $77.0 million for the next four years to undertake their innovative research in Australia," Ms Harvey said.

"The Future Fellowships scheme encourages research in areas of national priority, with preference given to researchers who can demonstrate a capacity to build collaboration across industry, with other research institutions and with other disciplines."