Western Sydney University is proud to once again participate in the annual Sydney Gay and Lesbian Mardi Gras parade being held on Saturday 4 March.

This will be the third year the University has marched for Mardi Gras and the theme of this year's float will be 'Equality Unlimited'.

Now in its 39th year, the Sydney Gay and Lesbian Mardi Gras is a celebration and inclusive expression of lesbian, gay, bisexual, transgender, intersex and queer (LGBTIQ) identity.

Vice-Chancellor Professor Barney Glover says the University is strongly committed to equality and inclusion of its LGBTIQ students and staff, and is proud to support diversity.

"Once again we are inviting our students and staff to march alongside the University's Mardi Gras float. This is a tangible way to support our staff, students and alumni from the LGBTIQ community and celebrate their valuable contribution to the University," says Professor Glover. 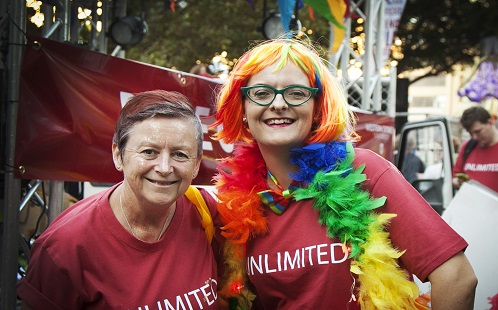 "As a vibrant and diverse intellectual community, Western Sydney University is proud to promote a culture that is inclusive of sexual and gender diversity."

Western Sydney University will march with the Ally Network, a staff and student group within the University committed to creating an inclusive and respectful culture for lesbian, gay, bisexual, transgender, intersex and queer community members.