The buzzing auditorium fell quiet. Hundreds of proud faces were transfixed towards the stage, as the guest speaker delivered the Occasional Address.

Jessica Knight is familiar with the graduation process. In 2009 she completed a Diploma of Science with Western Sydney University’s The College; in 2011 she completed a Bachelor of Science degree; and in 2012 completed the Honours component of the degree.

Next year she is looking forward to once again donning cap and gown, and walking across the graduation stage to collect her Doctorate.

But on Thursday 14 September she stood on the stage at Western Sydney University’s final September graduation ceremony for 2017 – not as a graduand, but as the Occasional Address speaker.

“Don’t let you past define your future,” Jess said to the graduates, who were on the cusp of becoming College alumni. “I came from where you are, and I’m here now. Don’t let the HSC define your educational journey.”

The College is Western Sydney University’s pathway program for students who may not otherwise have the opportunity to access higher education. Students enter The College to complete a diploma program, and may then enrol in the second year of an undergraduate degree at the University. 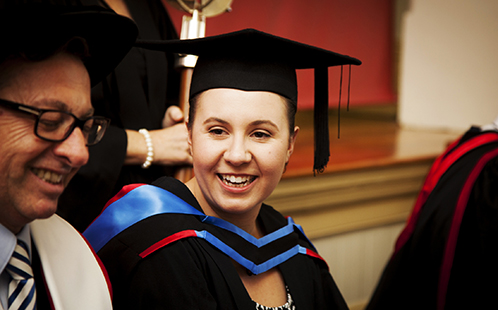 For Jess, The College was “a godsend.” She completed high school with a Universities Admissions Index (UAI) – the predecessor of the ATAR – of 49.95.

The former Blacktown Girls High School student, who grew up in Mt Druitt, admits that she did not apply herself in high school.

“I was an unruly student with an attitude problem. I really struggled with some classes; I didn’t apply myself; and I didn’t take well to being told what to do. So when I was forced in any particular direction, I rebelled,” she says.

“But at College you get treated like an adult. They let me be – left me to my own devices. I wasn’t dictated to, which made it easier.”

Jess began her university education as part of the first science cohort to go through The College (opens in a new window) – and in this more self-directed university environment, she thrived.

“In second semester, I remember one of the lecturers approached me to say how well I was doing. He encouraged me to do a major in Chemistry.”

This was a massive turning point for Jess, and as her confidence grew her marks continued to improve. By the time she finished her Diploma, her outstanding performance was rewarded with an academic scholarship.

She went on to complete a Bachelor of Science, majoring in Microbiology and sub-majoring in Biochemistry and receiving First Class Honours for her research into the effects of antibiotics on persistent bacterial populations.

Following the completion of her Honours degree, Jess commenced her PhD studies, specialising in medical microbiology. In July this year she submitted her PhD on microbial contamination of hospital surfaces. 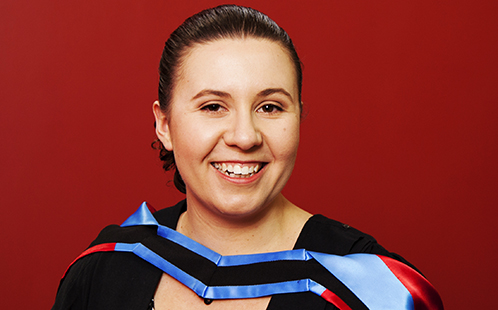 Jess says she always had an interest in science – she enjoyed Biology in high school, and at College she was able to try her hand at a whole range of science subjects. But it was when she first studied microbiology that Jess says she “fell in love.”

Jess’s doctoral research took her into Intensive Care Units of South West Sydney Hospitals – swabbing surfaces to look for contaminants such as Golden Staff infection. Her research led to a better understanding of how cross-contamination occurs in hospitals, and how to prevent the spread of contaminants by improving hospital cleaning practices.

Since the third year of her undergraduate degree, Jess has worked for Douglas Hanly Moir Pathology – in the labs, conducting food and water testing to pick up contaminations such as legionnaires disease. She would often work in the lab up to four nights each week, balancing her study commitments during the day.

Jess has certainly come a long way, from being the high school student with the rebellious streak. Looking back, Jess says the shock of such a low UAI made her work harder.

“Once I started at College, everyone in my class shared their UAIs – and mine was the lowest. I didn’t think I was going to make it through the first semester. I thought it would be like high school all over again, and I had no confidence left. But I came out on top in the end.”

For other students who may be struggling at high school, Jess has some pointed advice.

“At high school, you’re made to believe that your HSC is the be-all and end-all. I was told ‘If you don’t do well here, your life is over’ – and that’s absolutely not true,” says Jess.

“College is a place for second chances – you just need to put in the work and the options in front of you truly are unlimited.”