DNA research provides new hope for a bird on the brink In a fresh bid to save the southern black-throated finch from extinction, researchers are turning to a novel analysis of DNA to help plot a path to survival. Already extinct in NSW, this woodland species is endangered in Queensland, having lost 80 per cent of its range in the last 30 years. Under current development plans for its last stronghold, the Galilee basin, it's predicted to lose a further 57 per cent of its remaining habitat.

Under the cutting edge new plan, researchers will compare the DNA of living wild birds to the DNA of 100-year-old museum specimens that lived before the species' decline.

"Genomics is a powerful new tool in the conservationist's arsenal. Near extinction leaves its mark on a species' DNA, and by decoding this DNA signal, we can glean vital clues about the extent and nature of the black-throated finch's demise", explains scientist and team leader Dr Kerensa McElroy from the Australian National University.

"This will tell us whether the remaining birds have enough of this species' original genetic repertoire to survive and thrive if habitat is restored," says Dr McElroy.

"Changes in specific genes could also reveal previously unknown threats, such as pesticides. Our results will be crucial to the design of future captive breeding programs."

Dr McElroy's enterprising team is turning to crowdfunding(opens in a new window) to kick-start this high-tech research. With a target of $100,000, this is the largest Australian environmental crowdfunding campaign yet.

"More than 477 species of birds, reptiles, and mammals have gone extinct since 1900. Without humans, it is likely that all but nine of these would still be with us today", says collaborator Dr Alexie Papanicolaou, of the Hawkesbury Institute for the Environment, Western Sydney University.

"Crowdfunding is a chance for everyone who cares to be part of the solution, before it is too late" added Dr McElroy.

"If we can save the southern black-throated finch, we'll actually save a whole ecosystem, as these iconic birds are charismatic ambassadors for threatened woodland communities." 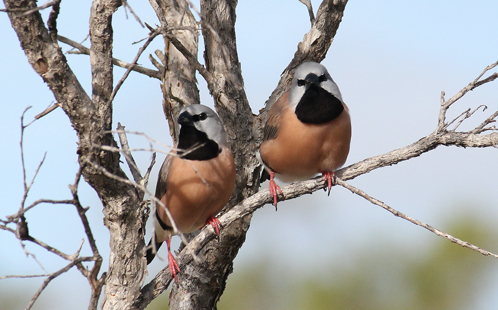