The following opinion piece by Dr Shanthi Robertson from the the Institute for Culture and Society at Western Sydney University and Kristine Aquino from the University of Technology Sydney was first published in The Conversation.(opens in a new window)This article is part of our series, Is Australia Full?,(opens in a new window) which aims to help inform a wide-ranging and often emotive debate.

Western Sydney is one of the fastest-growing regions in Australia. It's also one of the most culturally and linguistically diverse, as a key arrival point for refugees and new migrants when they first settle in Australia.

Various public figures and media outlets have connected asylum-seeker intake and immigration to traffic congestion and queues at hospitals in Western Sydney.

However, this kind of reaction can pin the blame for infrastructure and affordability problems on culturally diverse populations who may have already lived in Australia for many years, if not several generations.

Growth from international and domestic migration

We examined census data compiled by WESTIR Ltd, a non-profit research organisation based in Western Sydney, partly funded by the NSW Department of Family and Community Services. These data show that Greater Western Sydney's population increased by 9.8% between 2011 and 2016. Over the decade from 2006 to 2016, it grew by 16%.

About 55% of those living there were born in Australia, and about 39% where born elsewhere (the remainder did not state their place of birth). Most put English or Australian as their first response when asked about their ancestry. 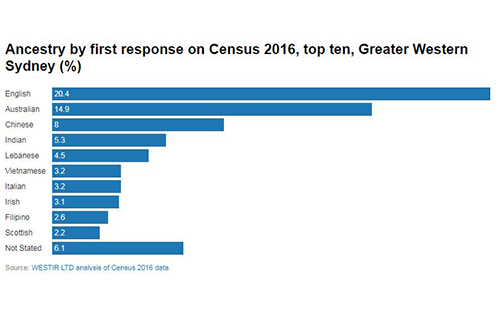 New births are slightly down in the region, meaning growth is coming from other sources. This includes new international migration arrivals, but also incoming residents from other parts of New South Wales and interstate.

Greater Western Sydney has long-established cultural and linguistic diversity. The percentage of residents born overseas has increased from 34.1% in 2006 to 38.7% in 2016. Overall, the west accounts for 50.2% of the overseas-born population for the whole of metropolitan Sydney.

Reasoned debates on sustainable migration intake levels are a crucial part of discussions of urban and regional growth. There are valid criticisms of "Big Australia" policies, based on resource and environmental sustainability.

But while the number of new arrivals settling in Western Sydney has increased steadily since the second world war, with a significant jump over the last decade reflecting accelerated skilled migration policies to fill labour shortages, the majority of overseas-born living in the region are long-term settlers who have been in Australia for ten years or more. So while critics may look at non-white Western Sydney residents and assume they are recent migrants, what they're often really seeing is multiple generations of multiculturalism. Most of these people are long-term local residents, not necessarily a sudden influx of new arrivals.

In addition, not all overseas-born residents are permanent settlers. Australia takes far larger numbers of temporary entrants than it has in the past. Most of these temporary visa holders, such as international students and temporary skilled workers, live in major metropolitan areas and their surrounds, like Western Sydney.

While some portion of these populations do stay on longer-term, they are not all permanent settlers who will add to long-term population growth. Net migration figures, which take into account people who depart Australia every year as well as arrive, and exclude short-term visitors, have generally been decreasing over the past six years.

Who do we define as 'migrants'?

New Zealand citizens moving under Trans-Tasman agreements and migrants from the United Kingdom are still among the largest migrant groups in Greater Western Sydney.

In many local government areas in Western Sydney – such as Wollondilly, the Hills Shire, Penrith, Hawkesbury and Campbelltown – England and/or New Zealand feature in the top five countries of birth of overseas-born residents.

If anxieties about migration and population in Western Sydney are based on genuine sustainability concerns and not xenophobia, why target mostly refugees and non-white migrants? Why focus only on areas with large non-white and non-English-speaking background populations?

Migrants do use infrastructure, but also drive economic and jobs growth

It's never as simple as one new arrival "using up" an allocation of limited resources, whether jobs, housing, or seats on trains. In fact, new arrivals fill the gaps of an ageing workforce, and current migration policies are targeted to favour younger migrants and specific skills shortages. Nationally, recently arrived overseas-born residents have a lower median age and a higher level of education than Australian-born residents.

Infrastructure problems are also problems of policy, planning and funding, rather than just population numbers. Problems in transport and health infrastructure in Western Sydney cannot be easily solved by reactive anti-immigration attitudes or policies.

Cuts to programs like the humanitarian program or skilled temporary work visas, where the intake numbers remain relatively small as a proportion of the overall population, will not solve those infrastructure problems.

Western Sydney is growing, and with growth comes growing pains. But equating the region's rich cultural diversity with a population crisis is the wrong message to send.