After postal vote, we will never think of western Sydney the same way again

Who will defend the rights of pastry chefs who "conscientiously object" to baking a cake for a gay wedding, implored Liberal senator James Paterson during the same sex marriage survey campaign.

With the results in, some parliamentarians will no doubt choose to contend with that very question. But a far more intriguing and important scenario has emerged on the back on the survey outcome. One that has much broader political and social implications.

Nearly 62 per cent of Australians said "yes" to same sex marriage but western Sydney "left the cake out in the rain". Just on 56 per cent of the region's survey respondents said no.

Why did western Sydney overwhelmingly vote "no"? And what does it say about changing attitudes and voter behaviour in Australia's most keenly contested political battleground?

Barring Mitchell, "no" dominated in all Labor held seats. Longstanding MPs, Jason Clare, Ed Husic, Chris Hayes, Michelle Rowland and Chris Bowen might well be considering the implications with respect to the social dimension of the party's broader policies. Or not.

Interestingly, "yes" reigned in the only three western Sydney electorates to change hands in the July 2016 election: Lindsay at 56.2 per cent, Macarthur 52.1 and Macquarie 63.9 per cent. Occupied by first-time Labor MPs, Emma Husar, Dr Mike Freelander and Susan Templeman, these are areas on the region's outer fringe: Penrith, Campbelltown, the Blue Mountains and Hawkesbury. The same sex survey results at this edge, reflect those returned throughout Sydney's east, most tellingly for Tony Abbott at Warringah, 75 per cent.

A pattern is emerging. Sydney is aligning itself into three cities, not of the spatial variety recently unveiled by the Greater Sydney Commission but an ideological shape characterised by a socially conservative core bracketed by two small 'l' liberal arcs. 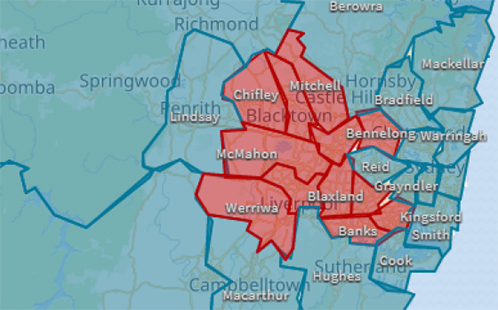 Whether the survey results are an advanced warning for the seismic voter shifts we have seen in, for example, Britain, the US or parts of Europe remains to be seen. They do, however, tell us something new about the change in traditional and long-held assumptions about western Sydney. In this case, I hate to say it, but the cake metaphor just doesn't cut it. It doesn't slice enough ways.

For whatever reason "no" voters across western Sydney did not identify the "yes" case. "Let's get it done" failed to move the majority of survey respondents west of Olympic Park. "Let's not," they replied. They just didn't see themselves in the campaign, nor the message.

Take a look at the most resolute opponents of change. For 78,332 of Blaxland's 104,435 survey respondents, the prospect of legislative change on same sex marriage was a bridge too far. What makes their attitude so different to that of the rest of the nation? Census data goes some way to addressing that question.

Marriage rates in Blaxland are higher but so is the proportion of couples separated.

The proportion of the electorate's residents enrolled in university or tertiary education is higher than the NSW and national average but the level of qualification attained lags, slightly.

Religion is a point of significant divergence. Only 13.4 per cent of Blaxland residents describe themselves as having "no religion" compared to 25.1 and 29.1 per cent at the state and national levels.

Linguistically, the difference is similarly pointed with 25.5 per cent of the electorate's households speaking "English only" at home contrasting with NSW and Australian averages of over 68 per cent.

Household income levels are low as are rates of home and motor vehicle ownership. Unemployment is well above state and national levels.

These figures do not resolve the question as to why Blaxland or any other western Sydney electorate voted no. Same sex marriage supporter, Jason Clare eschewed statistical rationales to observe, "Sometimes people with good hearts can have different views".

Compare Blaxland's response with the resounding yes vote in Macquarie and one thing is clear. The days of referring to the region as a homogenous whole are over. We'll never see "that recipe again".

Instead of engaging with an incredibly complex debate on cultural values with the sophistication it deserves, we ask "who will think of the cake makers". It's time to recognise the consequences, political and otherwise, of the shifting epicentre of Australian conservative values.