In a world that's constantly changing and in need of technological solutions for emerging problems, Western Sydney University engineering students presented their innovative project designs to industry partners at the 2016 Widevision showcase.

The Widevision program brings together students from a diverse range of disciplines to showcase their unique projects to industry representatives looking for the next generation of engineers and designers.

Engineering, Robotics and Mechatronics Honours student Nicholas Ralph, has developed a drone designed for human feature recognition. The drone works by subtracting its own movement from recorded footage and identifying humans.

"The done is essentially used for surveillance, usually after-the-fact. It works on a forensic level that's really highly detailed, and can even subtract the relative motion of the drone from the actual motion of the target," Mr Ralph explains.

"Most drone systems usually focus on processing images in the quickest way possible, and in the process can disregard accuracy or just skim the surface of the available information. My method essentially looks at taking a wide variety of information from the scene rather than just the quick surface bits." 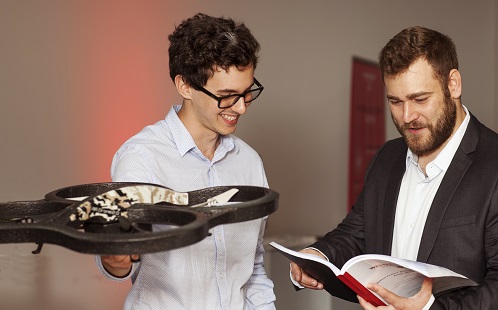 Ms Shorter designed EpicAIR, a full-body dryer that cares for the skin. Developed for the elderly it reduces the risk of slipping, falling, overstretching and inappropriate drying, giving the elderly and mobility impaired more independence and increasing their opportunity for self-care.

"EpicAIR is similar to what a hair dryer or hand dryer would do but for your entire body. We have an ageing population, a lot of us are living longer lives and I think it's a way to enhance the future of aged care," says Ms Shorter.

"The device blows warm, pressurised air over the entire body, acting as a comforting drying agent and removing all excess water on the skin, while not overdrying and damaging it." Mr Watts designed the Patientify aged care system to actively monitor the residents of elderly care facilities. The system includes a wrist band worn by the patient that tracks their temperature, pulse and proximity to staff in the aged care facility.

"The information is transmitted to a hand held device which can be viewed by carers in the aged care facility. It's got an interface where staff can scroll through, and has a patient database where they can track all the information the wristbands are collecting," says Mr Watts.

"With the growing number of aged care residents, the technology in the sector has to grow with it to be able to cope with increasing numbers." 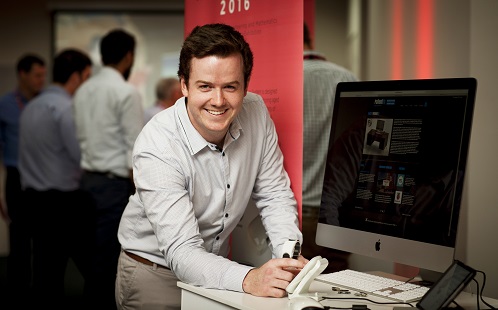 Muir Thomson from manufacturing company Laser Wizard saw the event as a chance to look at how the company can best work alongside university students.

"We're always interested in partnering with universities and the different ways we can do that. We've worked with the solar car team previously, and we help students bring their prototypes to production," says Mr Thomson.

"Instead of just doing an assignment, doing a year-long thesis really lets you see the potential of your studies. Working with the university, they were able to provide me with just about every piece of equipment I needed - the drone, software and workstations," says Mr Ralph.

"It's been really good. I've enjoyed it and it's help put me in a position where I want to be and so now it's just a matter of furthering my career," says Ms Shorter.

"I've loved it. It's a really practical course. Really hands on. I've learnt so much. All the skills I've learnt to complete this project I wouldn't have had prior to starting my course," says Mr Watts.