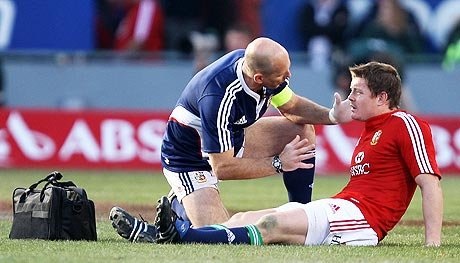 Athletes who play collision sports, like rugby league, rugby union and Australian rules football, are at increased risk of concussion.

Although the injury has become recognised as a public health concern, alarmingly, Sports Medicine Australia noted that:

What can we do to help keep athletes safe from concussion?

Coaches can be key to promoting a supportive environment when it comes to concussion safety and prevention. This is because coaches are among the most influential individuals in an athlete's life.

Their role extends beyond teaching technical and tactical aspects of sport, as they play an integral role in athletes' health, well-being and personal development.

However, researchers have found that coaches lack knowledge about concussions.

For example, an Australian study (opens in a new window) found that community coaches, who play a fundamental role in young people's initial experiences and safety in sport, were unclear about the common signs and symptoms, management and return-to-activity guidelines associated with sport-related concussions.

How are coaches learning about concussions?

Our research (opens in a new window) in Canada explored coaches' knowledge about concussions, including how they have acquired information about the injury.

Despite working in an environment with full-time athletic therapists at most practices and all games, the high school coaches in our sample did not feel confident in their knowledge of concussions:

"If you asked me all the concussion symptoms right now – I would be guessing. I would be looking at their eyes to see if they're dazed or dilated … I don't know. I would look for an abnormality in the eyes. But I certainly couldn't list the proper protocol."

The Canadian coaches told us they primarily acquired knowledge through personal experiences (as athletes and now as coaches and parents) and from reading sports media reports of prominent athletes' experiences. One coach said:

"I think media reports have changed the way I think about concussions. I take them more seriously. How many times did we get our bell rung and get back into a game? When you hear about the retired football, hockey and rugby players who are describing what they are going through … I'm sure that current players would not want to experience that in their retirement."

None of the coaches in our sample used, or were aware of, the free online educational materials offered through the Coaching Association of Canada (CAC).

The CAC developed a series of online modules aimed at educating coaches about concussions to help them better ensure athletes' safety in training and competition.

However, coaches are not required to complete the modules to gain accreditation. The extent to which these modules have improved athletes' safety from concussions is also not clear.

Similarly, the Australian Sports Commission provides coaches with general information about injuries on its website, but there is little to no information on concussions.

Some independent sporting bodies, such as the Australian Football League and the National Rugby League, have more detailed information about concussion management for their coaches. However, this type of information does not appear to be a mandatory part of their coach education, nor does it appear to be widely available for Australian coaches in other sporting disciplines.

This indicates that important concussion messages are not reaching coaches, which suggests coach certification agencies need to do more to ensure coaches are appropriately educated about the injury, recovery and management processes.

What is a concussion and what information are coaches missing?

A concussion is a brain injury caused by a direct blow or indirect forces (whiplash, for example) transmitted to the head.

Symptoms typically resolve within two weeks. However, a number of modifying factors (eg history of injury, age) can lead to a prolonged recovery.

Athletes who experience multiple or repeated concussions have been found to experience more severe symptoms, including depression and anxiety. Researchers have begun linking these instances with chronic cognitive impairment.

Researchers have also found that athletes under the age of 18 suffer more severe concussion symptoms than adults. This is concerning given the important cognitive development that occurs throughout adolescence.

Aside from lacking general knowledge of concussions, there are some common misunderstandings among coaches about the injury.

Some coaches believe that athletes must lose consciousness to be concussed, which is not true, and that protective equipment such as helmets/headgear and mouthguards will prevent concussions, which is also not the case.

Coaches are not expected to have the same training as medical doctors, nor should they be considered to be the sole person responsible for dealing with concussion injuries. But they can play a pivotal role in injury recognition and promoting a safe and supportive environment.

What can coaches do to help ensure athletes' safety?

Coaches can ask their local or provincial sport associations for concussion resources, policies and procedures before the season.

They can also take advantage of free educational resources like the concussion recognition tool. Experts developed this to help coaches recognise possible signs and symptoms of a concussion.

This pocket-sized tool can be printed out and carried to the field of play. It is particularly useful for those who do not have access to on-site health professionals (which is the majority of youth sport coaches).

Although only accredited medical and health professionals can make a diagnosis, this tool can empower coaches to help protect their athletes from the potentially catastrophic injuries that can occur when athletes return to play while concussed.

They can also create and foster a sport environment that encourages athletes to accurately report possible concussions.

To help dispel some athletes' fears or apprehensions about accurately reporting concussion symptoms, coaches could develop a protocol that would ensure all athletes have an opportunity to re-establish their position on the team after receiving medical clearance.