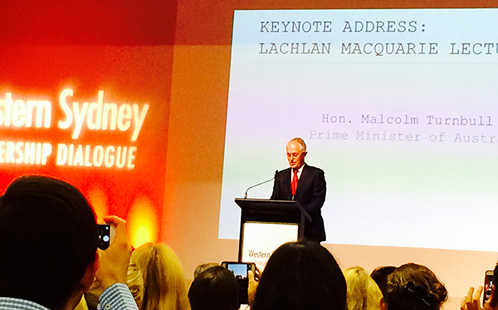 Over 400 business and community leaders have gathered at Western Sydney University to discuss the big ideas on how to harness Western Sydney's economic growth, and how to tackle some of the region's most pressing challenges like transport and infrastructure.

Organised by the Western Sydney Leadership Dialogue, the inaugural 'Out There' summit was held on March 11 at the University's Parramatta campus.

The summit included an address by the Prime Minister of Australia, Malcolm Turnbull, as well as keynotes from NSW Premier Mike Baird, NSW Opposition Leader Luke Foley, and Chair of the Greater Sydney Commission, Lucy Turnbull.

Delivering the inaugural Lachlan Macquarie address, the Prime Minister said Western Sydney is one of the fastest growing regions in Australia with the greatest potential for even more growth.

"More than one in ten Australian children are growing up in Western Sydney," said Mr Turnbull.

"We must educate and stimulate those young minds, enable them to realise their dreams, unleash their imagination and so continue to build their and our prosperity."

The Prime Minister pressed the need for greater infrastructure investment in Western Sydney to create fast and convenient public transport links - particularly to and from the new Western Sydney airport at Badgerys Creek, which will create nearly 9,000 additional direct jobs in the region by 2031.

"We are already setting aside space for rail including station boxes and approaches at the airport during construction so that the rail link can be established whether at the time the airport opens, which would be preferable, or later."

"And under the $3.6 billion Western Sydney Infrastructure Plan, jointly funded by my government and the NSW government, it will be well connected by roads when it opens."

During the speech, Mr Turnbull praised the University for hosting the Innovation Round Table at the Werrington Park Corporate Centre last October, contributing to the development of the Government's $1.1 billion National Science and Innovation Agenda.

"Right in the forefront of that innovation, of that Ideas Boom, has been Western Sydney University and I want to acknowledge that and thank you all for your contribution to that very important set of policy initiatives we announced last year," he said.

"That Innovation and Science Agenda will also address the imbalance between Western Sydney's growing population and the number of jobs it offers."

During the 'Out There' summit, Prime Minister Turnbull presented the inaugural Pemulwuy Prize for leading citizens to the Bankstown Poetry Slam, a not-for-profit community organisation founded by Western Sydney University students to give a voice to the many young poets and performers in the region.

At the awards ceremony, Western Sydney University also received the Western Sydney Leadership Prize as a 'Brand Champion' following the successful launch of its 'Unlimited' brand strategy in 2015.