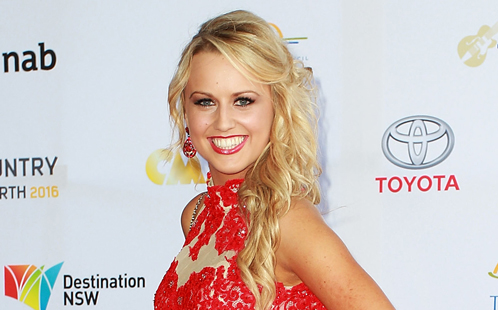 The remarkable rise of Western Sydney University Bachelor of Music graduate Christie Lamb has been officially recognised, after she was named Best New Talent at the Tamworth Country Music Festival.

The 23-year-old Campbelltown resident was handed a prestigious Golden Guitar award at the star studded Tamworth Country Music Association of Australia Awards on Saturday night. Christie was one of only two women to win an award on the evening, and the only independent artist.

Christie says her whirlwind journey from busker to rising star is only just starting to sink in.

"I'd been travelling to Tamworth for ten years to play my songs on the street and see my favourite artists, and to now be sharing the stage with them is an amazing feeling," she says.

"What made it even more special is the Best New Artist Award was announced by Aussie music icon Lee Kernaghan, who I've been touring the country with for the Songs and the Stories Tour. It's still pretty surreal, but it's starting to sink in now I'm back home and the Golden Guitar award is sitting on my piano."

Christie studied a Bachelor of Music at Western Sydney University from 2010 to 2012, and managed to juggle her studies with an increasingly hectic touring schedule.

"During the last year of my degree I was touring Australia with rock legend Jon English, which forced me to make some sacrifices. I still remember sitting on the edge of parties finishing my assignments on the laptop," she says.

"I really wanted my degree, and I'm proud of having completed my studies. It shows that if you want something hard enough, and are prepared to work for it, you can achieve your dreams."