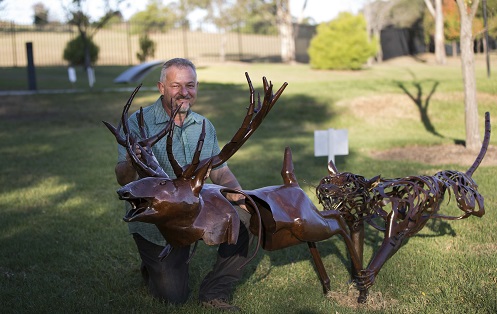 Joseph received the Award and $5000 prize money at a special ceremony hosted by Campbelltown Mayor Councillor Paul Hawker at the Campbelltown Arts Centre.

Life's Desperate Struggle, a 56-kilogram steel sculpture of a tiger pursuing a deer, was a popular exhibit set along the water's edge of the University's Campbelltown Campus.

University Art Curator, Ms Monica McMahon, says this year's exhibition was one of the most impressive in recent memory.

"From the onset, Joseph Bartolo's sculpture was an early favourite of the public," says Ms McMahon.

"By the end of the voting period, Life's Desperate Struggle had double the number votes of its nearest rival, showing it clearly resonated with visitors."

The runner up in the UrbanGrowth NSW People's Choice Award was Ingrid Morley for her piece, The Silent.