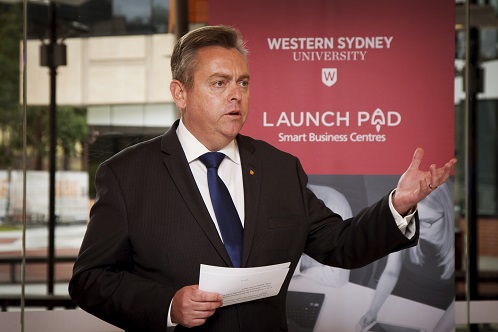 Mr Roberts said the funding was to help drive greater innovation and collaboration between researchers, small-to-medium enterprises (SME's) and startups.

"Western Sydney is a manufacturing and innovation powerhouse, it's a $100 billion economy, Australia's third biggest economic force after Sydney and Melbourne and home to about two million people.

"This Government knows that an investment in Western Sydney is an investment in the future of our State, indeed of the nation, and we want to do all we can to help accelerate innovation and industry development in this region.

"By supporting Western Sydney University to offer local entrepreneurs and SMEs better access to its research know-how and world class facilities, we can help SMEs better commercialise their ideas.

Mr Roberts said Western Sydney University was already well ahead of the game in providing support to SME's.

"I was delighted back in April to visit the Werrington Park Launch Pad - one of three WSU led, State Government supported smart business centres in Parramatta, Penrith and Liverpool, which provide businesses with modern, low-cost co-working spaces.

"Many businesses don't have the confidence, the knowledge or the time to effectively engage with research institutions, so we need to help them build these vital connections to help turn great ideas into business and jobs growth in Western Sydney," Mr Roberts said.

"The University's Launch Pad has quickly evolved to become an innovation driver for the region. There are over 8,000 manufacturing companies engaged in technology-based production in Western Sydney – the majority being SMEs," said Professor Glover.

"This industry sector employs nearly 12 per cent of Western Sydney's total workforce, which is why it is so critical that we support it to transform and grow.

"Close connection between SMEs and research institutions like Western Sydney University is key to driving innovation and advanced manufacturing for the region, and in turn, boosting both NSW's and Australia's global competitiveness."

For more information visit: www.industry.nsw.gov.au/ (opens in a new window).