After fleeing the Taliban in Afghanistan with his family, Hamid Sediqi arrived in Sydney as a young boy unable to speak English. 15 years later, the Masters of Research student at Western Sydney University has not only mastered English alongside biochemistry and molecular biology, he is also studying Mandarin part-time. After wowing judges with his hilarious first placed presentation at the Australian Chinese Bridge Competition, Hamid represented Australia at the international final in China, winning a six month scholarship to a Chinese university of his choice after his performance.

"To be honest, it's incredible to think I've represented Australia, especially in a Mandarin language competition," reflects Hamid, who only started studying Chinese in the final semester of his undergraduate degree in 2015.

"It was probably the most challenging thing I've done so far in my life. The competition was filmed for television, in front of judges and with millions of people watching. But having that stress was important, because it's what motivated me to go and do the preparation that got me here in the first place." 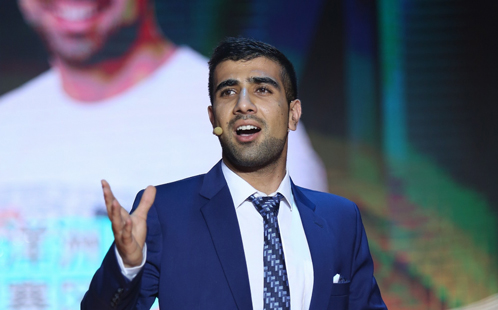 Life hasn't always been so smooth for Hamid. After spending much of his infancy in Kabul in Afghanistan, his family decided to flee to the relative safety of Pakistan when he was just six. Hamid spent several years in Peshawar with a large expat Afghan community, before moving permanently to Australia just in time for the 2000 Sydney Olympics.

"We left Afghanistan in 1996 after the Taliban took over, mainly over fears the Taliban were planning to kidnap boys for the army, and girls for the warlords. At the time my brother and sisters were teenagers, and their safety was my parents' biggest concern. So we left Afghanistan to live in Pakistan, and were fortunate to come to Australia a few years later."

After arriving in Western Sydney and starting school, Hamid slowly began to perfect his English, first in ESL (English Second Language) classes at school, and later with his friends and family.  He completed the HSC at Chester Hill High School and enrolled in a Bachelor of Science (Biological Sciences), where he only started studying Mandarin during the final semester of his degree.

"In my very last semester I had 4 electives and I chose Chinese, Japanese, philosophy and programming, which were interesting subjects that I'd never had the chance to pursue. I thought I'd only do one semester, but I fell in love with Chinese, and was encouraged by my Chinese teachers to continue my studies. Most of all I loved being able to communicate with a whole new group of people."

After completing his undergraduate degree, Hamid enrolled in a Masters of Research, and continued his study of Chinese. The lessons soon paid off, with Hamid handpicked for a Winter Camp Study Scholarship to Jinan University in Guangzhou, a partner of Western Sydney University.

"Studying at Jinan University with native students was mind blowing, as it was the perfect opportunity to test myself. In particular I really loved haggling, where I used my own version of Chinglish, a mixture of Chinese and English. I used to tell vendors I was a student, not a businessman, and that they had to take care of me financially. The whole experience was amazing, and really motivated me to study Chinese harder."

This practice put Hamid in good stead when it came time to compete at the Australian Chinese Bridge Competition, where his performance emphasised action, emotion and more than a little bit of humour.

"The event was a little intimidating, as there were people who were more proficient in Chinese. Ultimately I felt like I had to outperform them, which I did just because of the sheer weight of my preparation and determination. I practiced my speech everywhere- at home, in the shower, in the car, everywhere. " 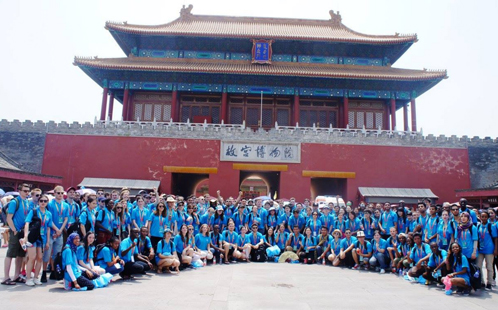 Hamid's victory in Australia means that in the past eight years, a Western Sydney University student has either won the competition or placed in the top three, reflecting the high standards of the Chinese program.

"There is no 'I' in team, and I am only here because of my teachers who put tremendous efforts towards my learning experience. Without the support and encouragement of Ruying Qi, Lijiang Zhao, Linda Gu, Xiang Chen, Wanhua Wu and others, I would not be champion."

Associate Professor Ruying Qi, the Director of Bilingualism Research Lab, is one of the many teachers who encouraged Hamid to pursue his studies. She says he always showed natural talent, but most importantly had passion and persistence for Chinese.

"With Hamid, his mixture of martial arts and traditional Chinese poetry clearly resonated with the judges. It was a very funny and interesting presentation, and showcased his personality well. Hamid and Madison Nixon, who won have only studied Chinese for one and a half years, and in the past month our teacher Lijiang Zhao mentored them closely; he and other teachers helped bring out the best for their Chinese performances."

"We always perform well in the Chinese Bridge Competition, and have actually won the Australian leg four times in recent years. This year we Hamid placed first, and our student Madison Nixon was awarded the Excellence in Performance category," she says.

For Hamid, the challenge was to immerse himself in his study of Mandarin to prepare for the international leg of the competition. He says he tried to think more in Chinese in the lead up to the finals, and not in English or Dari, his heritage language.

"I like to learn languages by having imaginary conversations, because through visualisation it's possible to discover what is important to learn in that language, and eventually you build the capacity to hold an entire conversation. Just like some things are much easier to communicate in English, and other things in Dari, one day I'll be able to say it's easier to explain in Mandarin. Well, that's the plan at least."

Professor Peter Hutchings, Dean of School of Humanities and Communication Arts, congratulated Hamid and Madison for their amazing achievements.

"Western Sydney University is strongly committed to expanding its international reach and reputation. With the University's tremendous team and institutional support, we are able to deliver one of the best Chinese programmes in Australia, and to help students like Hamid and Madison become truly global citizens."