With renewed interest in the origins and health of food, the UniSchools Steer Challenge has kick started the educational process for high school students from across Sydney by giving them the chance to raise their own steer. The students are given the opportunity to learn about the origins of the beef that society consumes through education on animal care, nutrition and agricultural industries.

The 2016 Steer Challenge saw 14 schools from across Sydney raise a Poll Hereford steer in their high school, with students feeding, handling and caring for their animals over 90 days.

At the end of the competition students gathered at Western Sydney University's Hawkesbury Showground, where they were judged as individuals and as members of their school team. Individuals competed in steer parading and steer judging, where they were assessed on their knowledge and presentation skills. The teams were assessed on its herdsman skills, with a focus on the students' knowledge and care of the animal from its arrival through to the day of the competition. 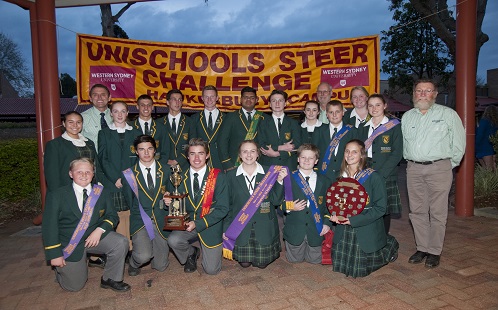 This year, the competition was fierce amongst the 14 schools involved, with judges praising the overall quality of the students' and schools' participation. Ultimately, Macarthur Anglican School took home the coveted award as Champion School of the UniSchools Steer Challenge 2016.

The Closing Ceremony also presented the following schools and individuals with awards: