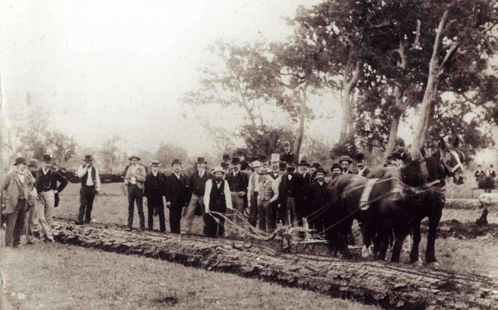 From the graceful grandstand that overlooks the rugby oval, to the rough-hewn boards of Stable Square, Western Sydney University's Hawkesbury campus is a site proudly steeped in history. That heritage will be celebrated on 16 March, as the University community gathers to mark the 125th anniversary of Hawkesbury Agricultural College (HAC) and the Hawkesbury campus

The date marks 125 years since the official opening of the College by the Honourable Sydney Smith, Secretary for Mines and Minister for Agriculture, on 16 March 1891.

Special guests at Wednesday's event will include Professor Richard Bawden AM, Chair of the Hawkesbury Foundation, and Mr Neil Inall, HAC alumnus, as well as members of the University and alumni community. Also present will be 91-year-old Mr George Bennett, another HAC alumnus, who will help unveil a special plaque for the occasion.

Hawkesbury Agricultural College was the first agricultural college in NSW, and has played a formative role in developing the state's agricultural and horticultural industries. The Ministerial Group poses for a photograph at the opening ceremony, 1891

Students came from across Australia and from around the world to study at HAC. Some of the more famous names to study at the College include the sons of Prime Ministers, Billy Hughes and Edmund Barton, a member of the Yates gardening family, several members of the Lindeman wine-making family, and the son of Henry Lawson.

Another noteworthy former student is Andrew 'Boy' Charlton, who represented Australia at three Olympic Games. Charlton was already a well-known swimmer when he enrolled at HAC in 1923. He left the College in 1924 to attend the Paris Olympics where he broke the 1500 metre world record.

Vice-Chancellor Professor Barney Glover says the University is proud of the campus and its rich heritage.

"The Hawkesbury campus forms an important part of the University's long and distinguished educational history, and has continued to develop into a vital science, agriculture, technology and health precinct for the University – home to some of the most outstanding teaching and research facilities anywhere in the country," says Professor Glover.

"We are pleased to mark this 125-year milestone. The campus holds a very special place in the hearts of our Hawkesbury alumni, and we look forward to witnessing the achievements of the next generation of agricultural and scientific leaders, particularly as Hurlstone Agricultural High School prepares to be co-located on the campus from 2020."

The University is planning further activities throughout the year to mark the 125th anniversary of Hawkesbury Agricultural College and the campus.