UWS joins new organisation to give voice to Sydney's west 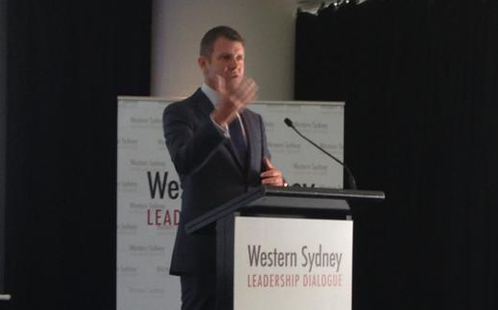 The NSW Premier, the Hon Mike Baird, has launched the Western Sydney Leadership Dialogue (WSLD), established to support local institutions and ensure Western Sydney's aspirations are front of mind for leaders in government, business, education, sport and the community.

Chairman and founder of the WSLD is Christopher Brown, AM, a member of the UWS Board of Trustees, and its patrons include the Hon. Nick Greiner AC, Mr Cameron Clyne, the Hon. Craig Knowles AM, Dr Kerry Schott, and UWS Chancellor, Professor Peter Shergold AC.

"I'm proud to be able to launch the Western Sydney Leadership Dialogue, which is set to play an important role in advocating, promoting and addressing the needs of one of Australia's fastest growing regions," Mr Baird said.

"The Dialogue represents a united voice for Western Sydney and by opening up the region's conversation to NSW's major stakeholders, will ensure the area is well-placed to meet future aspirations and provide a strong platform for future leaders.

"The NSW Government looks forward to working closely with the Western Sydney Leadership Dialogue, its patrons, partners and network of leaders, to encourage and promote further discussion about the future of Western Sydney."

Christopher Brown said this non-partisan, not-for-profit initiative will facilitate the conversation on public policy reform, and advocate for the sustainable development of one of the fastest growing regions in the nation.

"Western Sydney is now on the radar more than it has ever been, but with that profile comes the need for an informed and co-ordinated approach to ensure the region's vision is understood and well-supported," he said.

"Fortunately, the Dialogue not only represents a diverse range of views, but is also about demonstrating leadership and action on key issues, and through our ongoing program of events, initiatives and partnerships, we'll be positioned at the forefront of change in the region.

"One of our most important functions is to foster and nurture a leadership network in Western Sydney so that the region's presence and influence is felt across the boardrooms, newsrooms and Cabinet rooms of the nation.

"The Dialogue's approach is bold, inclusive, diverse and innovative - like the people of Western Sydney it represents."

At today's launch at ANZ Stadium in front of over 120 regional leaders, UWS Vice-Chancellor Professor Barney Glover announced that the University will work with the Dialogue and the Business Chamber to develop a forty-year plan for Western Sydney.

He said the ambitious plan, which will incorporate research by the University's own Centre for Western Sydney, will assist the government, private and public sectors to better understand the demographic, employment and infrastructure forces underpinning Western Sydney's growth.

"There has never been a more important time for a Western Sydney vision," said Professor Glover.

"Greater Western Sydney is the fifth largest economy in Australia. With projects such as WestConnex, NorthConnex, the Parramatta Light Rail, and a new airport at Badgerys Creek, we are at the horizon of one of the largest infrastructure spends in Australian history.

"The forty-year plan gives us the opportunity to work together with our partners in business, government and the community to harness these developments and create a shared vision of Western Sydney's future – a vision that connects the places we will live in, the education we can access, and the jobs we can create to make Western Sydney prosperous."

David Borger, Western Sydney Director of the Chamber, said that through the Dialogue, he would continue to advocate for the region, increase its public presence and exert more influence on structural changes required in Western Sydney.

"The Sydney Business Chamber advocates for the prosperity of Western Sydney by providing a voice for the business community on issues which impact the region," he said.

"Our role is to shift government and business attention to Western Sydney so we can meet the 500,000 jobs deficit expected by 2050.

Acting Executive Officer for the Western Sydney Community Forum, Eva Gerencer said that the organisation's mission is to strengthen communities across the region.

"We're excited to be a partner of the Western Sydney Leadership Dialogue, bringing community, business and government into the same space, with a common goal to make Western Sydney a better place," she said.

"This is one of the most diverse and dynamic regions in Australia and we are excited about the possibilities that the Dialogue will bring."