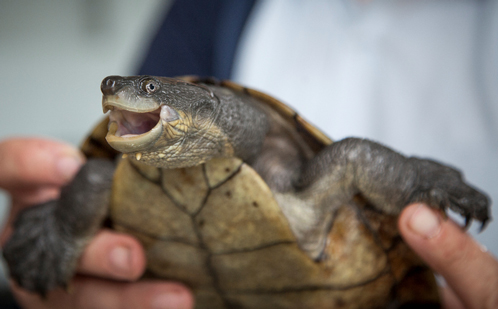 As predators and mystery illnesses drive turtle populations in Australia to extinction, Western Sydney University scientists are asking Australians to join the fight during Turtle Month using their smartphones.

November is Turtle Month, a dangerous time of year for turtles as they leave the safety of the water to nest.

To help pinpoint the location of turtles across Australia, Western Sydney University researchers have launched TurtleSAT (opens in a new window), a mobile app and website to log sightings of turtles, alive and dead.

"By knowing where turtles are crossing roads or making their nests, we can introduce new measures to protect them," says Dr Ricky Spencer, from the School of Science and Health.

"As a result of Turtle Month last year, we had more than 1000 recordings on TurtleSAT, which resulted in the construction of road signs to warn drivers of areas where turtles are crossing."

"Conservation agencies are now directing resources into managing nesting grounds, rather than broad-scale poison baiting. This is Citizen Science in action."

For Turtle Month in 2015, TurtleSAT has some unique major prizes for Citizen Scientists. Everyone who records a sighting will go into the draw to receive a series of amazing drawings and photos.

Dr Spencer says time is running out for turtles around Australia.

"The Bellinger River Snapping Turtle- a species over two million years old- was in healthy numbers in January this year, but by March it was close to extinction," he says.

"Throughout most of Australia, predation on nests and nesting females is extreme, with foxes able to destroy up to 100 per cent of turtle nests in an area."

"They are top predators and major scavengers and if they disappear like they have in the Bellinger River, then water quality will be affected," he says.

"The good news is there is hope. If people around Australia record their turtle sightings through TurtleSAT, we can take measures to protect the fragile populations still left, and help the animals recover."

To become a Citizen Scientist and have a chance of winning these unique prizes, just download the App (opens in a new window). Keep up to date with news and alerts via Facebook, Twitter and Instagram (search TurtleSAT).