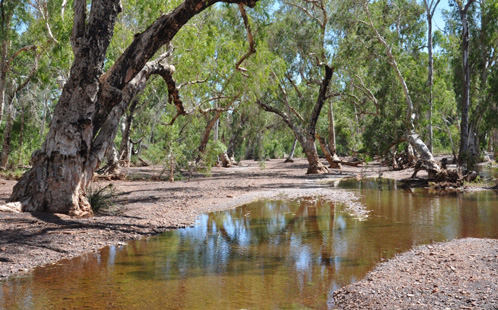 Mining below groundwater tables is increasing globally, but little is known about what happens to nearby trees and ecosystems when groundwater is diverted around mines to prevent the flooding of pits.

"We know Australian trees, such as eucalypts, can extend roots 30 meters or deeper into the ground to find water," says Dr Sebastian Pfautsch, from the Hawkesbury Institute for the Environment.

"What we examined in this study is how these trees respond when nearby mine operations start changing underground water supplies."

To examine the effect of mining on ecosystems, Dr Pfautsch, in partnership with The University of Sydney and Rio Tinto Iron Ore under an Australian Research Council Linkage grant, studied eucalypts near open-cut mines in the Pilbara region in Western Australia.

The study, published in the international journal Ecohydrology (opens in a new window), assessed the health of trees by measuring their water use at sites where groundwater levels had artificially been lowered or raised.

Dr Pfautsch says the water use of trees some several kilometers away from mine sites was sensitive to changes in groundwater levels.

Dr Pfautsch explains the reduction in growth will cause a decline in the carbon sequestration capacity of trees.

"In addition, the potential increased mortality of trees may impact the services provided by the entire ecosystem," he says.

"The management of ecological water requirements of trees is essential and has been well executed in semi-arid landscapes like we studied in the Pilbara, but should also be implemented in other mining regions in Australia."

Dr Pfautsch says his study may have implications for new and expanding open-cut mining operations like those on the Liverpool Plains in northern New South Wales, and elsewhere in eastern Australia.

"For example, the Environmental Impact Statement for the planned Shenhua Watermark coal mine concludes that because groundwater naturally occurs 20 metres below the surface where plants supposedly cannot reach it, the existing vegetation communities within the project boundary are not depending on groundwater," he says.

"Hence, it is believed lowering the groundwater table will have no effect on these vegetation communities. But the source of water accessed by the existing vegetation seems to have never been determined, and trees often rely on capillary water in soil that rises up from the water table."

"Access to such water is particularly important during dry periods where moisture in the upper soil layers is not replenished by rainfall. And the availability of this capillary water is strongly dependent on the depth of the water table."

The research of Dr Pfautsch shows that falling (and also rising) groundwater levels can potentially impact tree-dominated ecosystems beyond the border of a mine.

"Although hydrological modeling has identified the extent of declining water tables around the Shenhua Watermark mine, the impact this decline may have on trees and ecosystems further away from the mine is unknown," he says.

"For this reason, the effect of changing groundwater levels on forest and woodland surrounding the mine site, such as trees in the Breeza State Forest with its critically endangered Box-Gum Woodland, must be included in Biodiversity Management Plans."

"Negative effects on tree health as a consequence of declining groundwater could be detected relatively early by monitoring their water use and other indicative parameters related to their growth. This can provide options to adjust water management strategies, similar to what we see in the Pilbara."