Space treaties are a challenge to launching small satellites in orbit 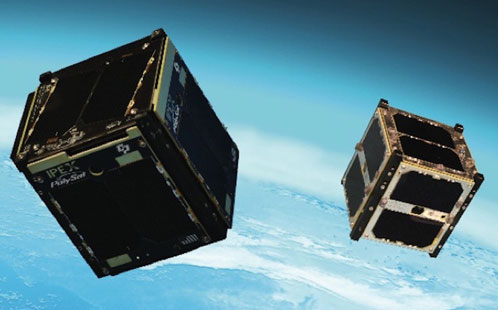 The following opinion piece, by Professor Steven Freeland from the School of Law, was first published in The Conversation website.

Until recently the idea of launching a satellite into space was an expensive business and the preserve of governments, international space organisations and multi-million dollar companies.

But now, thanks to advancements in microelectronics and miniaturisation, tiny satellites called nanosats or cubesats – some the size of a 10cm cube – are being built at far less expense and launched by university researchers and start-up companies.

Australia is one of the most active countries in this exciting new technological endeavour. For example, UNSW, Sydney University, University of South Australia and Adelaide University are all involved in the European QB50 (opens in a new window) cubesat project. The Sydney-based Launchbox is using balloon-launched cubesats in education.

The emergence of nanosats and the tiny cameras and other instruments that they can carry into space opens up a plethora of possibilities, many of which we are simply not in a position to comprehend or even imagine at this point.

There were just 75 nanosat launches prior to 2014 but a further 500 are expected by the end of this year, according to a report by Deloitte.

It's possible to liken their potential to the way that mobile phones have transformed terrestrial communications over the decades.

For example, nanosats may revolutionise our capacity to observe the Earth from space. If companies such as Google, SpaceX and others have their way nanosats may help provide internet services to the two-thirds of the world that still lacks coverage.

Yet, despite the tremendous potential offered by nanosats, it is important to recognise that launching and flying any satellite, no matter how small, is subject to strict rules under international law, as well as regulatory requirements in national legislation.

But these rules are a constraint on the ability of small players to fly nanosats, irrespective of the availability and cost of orbital launches.

Launches of Australian-owned satellites are subject to Commonwealth legislation called the Space Activities Act. This was enacted in 1998, primarily to establish a set of rules for private companies proposing to launch satellites from various locations in this country.

The reason why the Australian Government must authorise an overseas launch is that Australia has long accepted legal obligations for spaceflight activities under the international space treaties. Australia ratified the Outer Space Treaty in 1967 and the Liability Convention in 1972.

As a launching state, the Australian Government is liable for damage done by a space object for which it is responsible. This includes a space object owned by an Australian citizen or a company incorporated in Australia, even if launched from another country.

Responsibility by governments for the mistakes of privately owned entities is unusual in international law and reflects the assumption of the super powers of the 1960s that spaceflight would primarily be a governmental activity.

Much has changed in the intervening years but the international rules remain the same.

In response to this international liability to pay compensation, the Australian Government, like many other governments, requires satellite owners to satisfy it that they have insurance or the financial means to reimburse the government against the cost of international claims for damage up to a specified limit.

There is also a requirement to show that there is a low risk of harm to public health and public safety.

The requirement that owners of nanosats clear the same regulatory hurdles as apply to the established players has given rise to considerable discussion and suggestions for reform. The cost of insurance to cover the potential third party liability damage is a significant entry barrier for many nanosat builders.

While nanosats are much smaller than the average low earth orbiting satellite, there will eventually be many of them. They are still large enough to cause serious damage to other spacecraft supplying important services such as Earth observation and meteorology. It is important that clear rules are established to provide certainty and appropriate standards.

This has not escaped the attention of the authorities both at the international (United Nations) level but also on a national basis. There is also the risk of a backlash from the established "large" satellite operators concerned about the potential increase in collision risk from the additional number of small objects in low Earth orbit.

The nanosat proponents counter by pointing out that nanosats are designed to safely deorbit – burning up harmlessly in the atmosphere – at the end of their relatively short lifespans, arguing that they constitute a relatively small increase in the overall number of objects in low Earth orbit.

The debate continues and the solutions are yet to be worked out. Many Governments are now faced with trying to regulate for the challenges and opportunities that small satellites present.

Countries such as the United States and The Netherlands have recently changed their domestic space law in an attempt to find the right balance. Austria's recently passed Space Law  was principally motivated by the small satellite activities of its universities.

In Australia, considerations of public safety are being replaced by international concerns about space debris and the need to protect established satellite services.

There is no immediate prospect of changing the rules under international law. But the history of spaceflight since the introduction of the space treaties suggests that the chance of a monetary claim against the Australian Government is very small. There has never been an official claim made under the Liability Convention against any government.

The challenge for our policy makers is to lead the world in reforming the domestic rules to strike a fair balance between protecting the public purse and controlling the risk of collisions in space.

One possibility being promoted by the entrepreneurs is an exemption for small satellite operators from some of the insurance and financial responsibility obligations that currently apply under Australian law.

This would allow a new high technology industry to flourish in Australia without what some may regard as a disproportionate regulatory or financial burden.

Whatever changes might eventually be introduced must not, however, absolve anyone involved in space activities from the obligation to engage in best practice and take whatever steps are within their capability to protect the broader community.

This article was co-authored by Michael Davis, a Faculty Member of the International Space University and co-director of the Southern Hemisphere Space Studies Program at the University of South Australia.