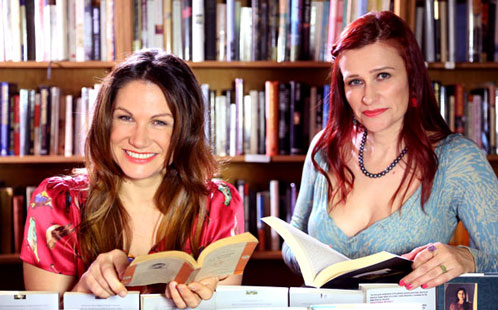 Television Sydney's critically acclaimed book show, Shelf Life, will celebrate a milestone 100 episodes when it returns to the small screen in May.

Featuring episodes dedicated to cooks and books, feminism, children's literature and the arts, as well as all the latest reviews and author interviews, this fifth season is set to be the most diverse yet.

Hosted by writers and academics Dr Milissa Deitz and Dr Rachel Morley, from the University of Western Sydney, Shelf Life starts by taking a look into the world of popular culture at Oz Comic Con, and chats with Western Sydney author, Luke Carman.

The show explores the Bodleian Library's First Edition collection of Shakespeare's works, printed in the 17th century, and the mystery behind its century-long disappearance; what makes Australian Children's Laureate and Older Australian of the Year Jackie French so passionate about reading; and chats to Australia's only vegetarian butcher about why she's come under fire from meat eaters and non-meat eaters alike.

"This season Shelf Life will reach a benchmark 100 episodes, and includes contemporary literature and interviews with authors about some very original books," she said.

"We cover many books and writing forms that will appeal to teachers, students and people interested in new ideas.

"Television Sydney and the University of Western Sydney is proud to present thought-provoking and entertaining television programs like Shelf Life to its viewers."

Season Five of Shelf Life will begin screening weekly on Television Sydney (TVS) on Tuesday, May 19 at 7.30pm, starting with its special 100th episode. Each episode will repeat Wednesdays at 2pm, and Fridays at 5.30pm.Follow Shelf Life on Facebook and on Twitter.