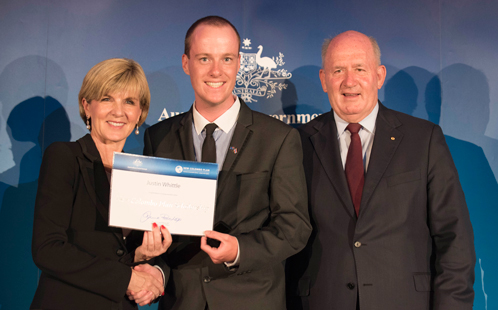 Two more Western Sydney University students will travel to Asia as part of their degrees after being granted scholarships under the prestigious New Colombo Plan.

Final year Bachelor of Policing Caitlin Alderson will soon be flying to Hong Kong to complete her degree at the City University of Hong Kong. Justin and Caitlin were awarded the prestigious scholarships by the Governor-General, His Excellency General the Honorable Sir Peter Cosgrove AK, MC (ret'd), and the Minister for Foreign Affairs, the Hon. Julie Bishop MP.

Justin is one of 100 New Colombo Plan scholars who received their awards for study commencing in 2016.

"Its an incredible honour and I would like to thank the Australian Government and the Honorary Julie Bishop for giving me the opportunity to represent Western Sydney University to study in the Indo-Pacific to unlock agriculture innovation potential," he says.

"I'm interested in new food systems, and unlocking innovation in the agriculture sector to give new opportunities for farmers to do business, trade and have access to new markets in the Indo Pacific Region."

During her time in Hong Kong, Caitlyn aims to supplement her official studies with internships at the Hong Kong Police Force and the AFP Police Liaison Officers at the Australian consulate.

"I'm hoping my time there will give a greater understanding of processes and procedures of policing in Hong Kong, which is one of the safest cities in the world," she says.

"By taking part in a variety of internships and studying at an international university, I hope to broaden my understanding of multicultural law enforcement and bring this knowledge back to Australia."

NCP Scholars study in an approved program destination in the Indo-Pacific for up to a full academic year.  In addition to this, the experience can include internships or mentorships for up to six months, and language study.