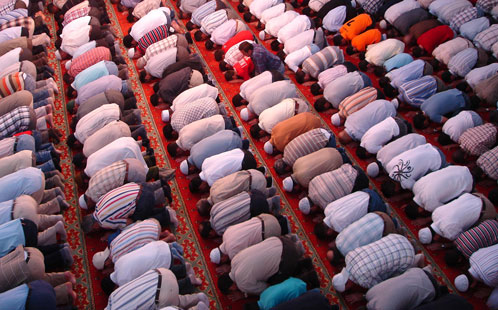 The following opinion piece, by Dr Milad Milani from the School of Humanities and Communication Arts, was first published on The Conversation website (opens in a new window)

The modern era defines a period when Islam passes through the shadows, or so it would seem. Islam remains in the media spotlight, with anti-Islamic rallies being held around Australia. It is portrayed as the religion that fails to integrate into modernity. Apparently, the only remedy is the construction of a "Western Islamic" identity.

This is a hugely problematic and skewed view of Islamic history and the potential of Muslim communities. Richard Bulliet, professor of history at Columbia, has argued that the period 1300 to 1900 is the "golden age" of Islam. This period is hardly talked about in academic circles and seldom without the taint of Bernard Lewis' hypothesis about the decline of the Muslim world and his claim about the unimaginativeness of the Muslim empires during the age of European discovery.

This portrayal, Bulliet argues, resonates strongly with the contemporary notion of Muslims as dullards incapable of inventiveness and innovation in the modern world. An aspect of this is that the "West" has bought into the Salafi argument that there is a pure form of Islam against which the great diversity of the global ummah (Muslim community) is tested.

The global reality is different. Bulliet makes a pertinent point about "Islam" being the "Open Civilisation". He also presents the clearest evidence to refute a theory of decline.

The period 1300 to 1900 was a time of increased conversion to Islam in what Bulliet calls the "Muslim south", places such as West and East Africa, Southern India, Bangladesh, Southeast Asia, but not including equally important newly converted outer-lying regions such as China. The phenomenon of conversion to Islam during 1300 to 1900, a period of so-called decline, undermines the credibility of Lewis' influential thesis.

Most of the world's Muslims today are direct descendants of those converts from the 1300 to 1900 period, which occurred after the Mongol devastation. These Muslims have little connection with those Muslims of the early medieval era, a period of conquest and empire-building, nor with earlier events in Mecca and Medina.

The point often missed is that they are the majority of the Muslim migratory population who are presently moving into regions of the Western world. It is their voice that is not being heard; instead, a conservative, puritanical view of Islam has made a deep impression on the Western imagination.

This blinkered view of Islam continues, for example, to be perpetuated through Saudi Arabia. The kingdom is both privately and publicly invested in promoting its own traditionalist version of Islam. Such a view, though constantly in the "public" eye, does not constitute a majority in Islam, nor does it amount to hegemony over Islam.

There seems to be confusion about what constitutes "majority" opinion on, say, hardline attitudes and what might qualify as "hegemony". Having less than a quarter of the Muslim population advocating death for apostasy does not equate with majority. Radical Muslim groups vying for a caliphate do not constitute hegemony. There has to be a majority for there to be hegemony, and the majority of Muslims are ordinary, more liberal-minded people.

Another side to this is that Muslims should have the right to practise their faith freely, in whatever form and to whatever lawful degree they choose, without being suspected of being "terrorists". People who are strict practising Muslims are not necessarily associated, and should not be assumed to be, with extremist militant jihadists. Practising one's religion with sincerity and rigour is one thing; being confused with extremist militant jihadists is another thing altogether.

It is true that people in Muslim countries around the world retain an anti-"Western" attitude. They oppose American, British or Australian policies, for example. Yet there is not necessarily a causal link between this attitude and Islam.

Reinforcing this argument is that most Muslim countries in the Middle East are not governed by Muslim regimes, but by autocratic rule. Over the past half-century or more, foreign support of these autocracies has understandably led to Muslim disdain for "Western" involvement. The fall-back to religion, Islam, for those who feel oppressed by autocracies certainly does not reduce the whole of Islam to a religion that breeds radical jihadists.

Religions are not themselves living phenomena that move through time; they are moved by the actors who interpret core religious texts and participate through the religions to which they belong. Human agency makes the religion what it is.

Religion is ultimately subject to interpretation and its manifestations are representative of the struggles that individuals face in coming to terms with what it means to be religious in everyday life.