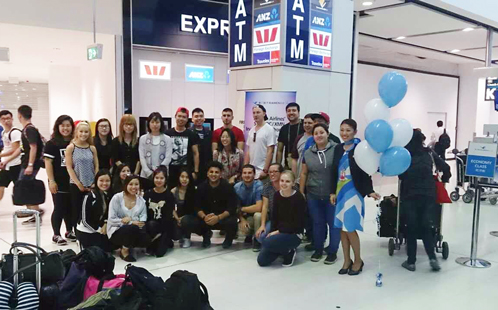 For the second year, thirty Western Sydney University students are travelling to Fujian province in China for a two-week cultural immersion course funded by philanthropist Josephine Lam and the Chinese government through the Australia-China Bridging Scholarship Program.

Adding to the excitement of this year's trip, the students travelled on the inaugural Xiamen Airlines flight from Sydney to Fuzhou on November 30. To celebrate the new route, they also attended a pre-departure ceremony at the airport before they boarded their aircraft.

The aim of the trip is to develop relationships and an appreciation for Chinese culture and business practices thereby forging links that will serve to increase understanding between the two countries.

During their stay, the students will be introduced to Chinese language, business and trading opportunities between China and Australia, Chinese business management and Chinese contemporary development and culture study.

Nancy Guo, who is a student ambassador and program head this year, was a scholarship recipient who went on last year's trip. She is enthusiastic about returning again to China and says students will learn a lot during the trip.

"This is a real life setting so students will see how you conduct a business relationship in China. Even though there has been a lot of modernisation, there is still an element of traditional China in business and I think a lot of companies wanting to do business in China don't appreciate that," she says.

Having almost completed her degree studying both business and international relations, she is looking forward to catching up with the network of contacts she made in China during her last trip. She hopes one day to work there either for the Australian Government or perhaps even starting her own business.

Josephine Lam, the philanthropist who helped fund the exchange is the founder of TK Pacific Marketing, Chairman of the Australian Fujian Association and Director of the National Institute of Chinese Education. She is heavily involved in charity and community initiatives and works to promote bilingual education opportunities for Australian and Chinese students through the National Institute of Chinese Education. Her donation furthers Western Sydney University's ability to create new friendships with the Chinese community and help build a strong future for friendship and cooperation between China and Australia.