Buen Vivir: South America’s rethinking of the future we want 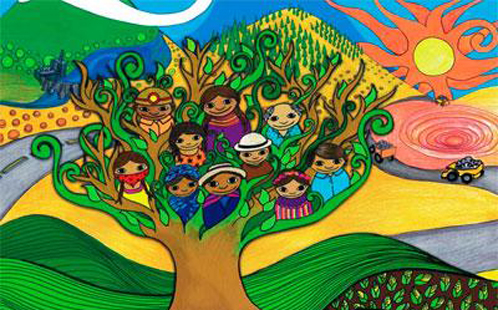 The following opinion piece, by Dr Juan Salazar from the School of Humanities and Communication Arts, was first published on The Conversation website.

Two years ago heads of state and government and high-level representatives from across the world met in Rio de Janeiro, Brazil, for the United Nations Rio+20 Summit. One important output was the document, The Future We Want. This outlined a vision for an economically, socially and environmentally sustainable future for the planet and for present and future generations.

But the initiative was met with hesitation and resisted by civil society groups. The alternative People's Summit Rio+20 launched the document Another Future is Possible. This came out of the 2012 World Social Forum and aimed to articulate a different vision for sustainable development. This vision was shaped in part by a transformative program sweeping South America since the mid-2000s: Buen Vivir, which is Spanish for "good living" or "living well".

This idea had already been incorporated into the Peoples' Climate Summit in Cochabamba, Bolivia, in 2010. Buen Vivir draws from ancestral conceptions of sumak kawsay in Quechua and suma qaman in Aymara, the two most widely spoken indigenous languages in the Andes region of Ecuador, Perú and Bolivia.

There is no single definition of Buen Vivir. Collective well-being comes close. It is germinating through a range of perspectives and social actors across South America.

Buen Vivir is still a concept and a lived practice under construction. To give a clue to what it is not, it's the opposite of the Fairfax-Lateral Economics Wellbeing Index, which puts a dollar figure on national wellbeing using a range of indicators.

Unlike any index based on logarithmic economic indicators, in Buen Vivir the subject of wellbeing is not the individual, but the individual within a community in relation to a specific cultural-natural environment.

Buen Vivir is foremost a decolonial stance. According to leading proponent Eduardo Gudynas, executive secretary of the Latin American Centre for Social Ecology, it calls for a new ethics that balances quality of life, democratisation of the state and concern with biocentric ideals.

This is much more than an emergent discourse of engaged intellectuals and Indigenous cultural activists contributing to the sustainability debate. It's a strong criticism of the discourse of sustainable development itself. Drawing on the wealth of the region's indigenous cultures, it has emerged as a lived practice against commodification, a way of doing things differently.

Gudynas sees Buen Vivir as a new paradigm of social and ecological commons – one that is community-centric, ecologically balanced and culturally sensitive. It's a vision and a platform for thinking and practising alternative futures based on a "bio-civilisation".

… denotes, organises and constructs a system of knowledge and living based on the communion of humans and nature and on the spatial-temporal-harmonious totality of existence. That is, on the necessary interrelation of beings, knowledges, logics and rationalities of thought, action, existence and living. This notion is part and parcel of the cosmovision, cosmology, or philosophy of the indigenous peoples of Abya Yala but also, and in a somewhat different way, of the descendents of the African diaspora.

The concept has been adopted in many academic circles across Latin America, mostly by intellectuals-activists and primordially by indigenous organisations and cooperatives. Many attempts are being made to translate it into normative principles that can permeate both public and political spheres. This is especially the case in Ecuador and Bolivia where Buen Vivir and the Rights of Nature have been inscribed in the constitutions.

The Preamble of the Ecuadorian Constitution states:

We decided to construct a new form of citizen co-existence, in diversity and harmony with nature, to reach 'el buen vivir, el sumak kawsay'.

Following its constitutional adoption in 2008, sumak kawsay or "collective good living" was taken up in a National Plan for Good Living 2009-2013.

A common feature of the diverse anti-austerity movements in Europe, Occupy and Buen Vivir is the reaction against the political legitimacy of institutions and increased mistrust of the financial sector and the political class as a whole.

But in Latin America, unlike Europe, this is less linked to financial crisis and austerity policies. And while the European movements include right-wing, xenophobic, ultra-nationalist groups, Buen Vivir is far more unified and proactive in developing a program for alternative solidarity economies and practices.

This is an important divergence. Europe's anti-austerity movements seem to be, at least on the surface, an essentially Eurocentric (or Europeanist at best) project to push for a more humane capitalism. Looking at the Podemos movement in Spain, its proposals are basically a template for organising economic relations in a fairer way.

The Occupy movement is certainly internationalist in intent. Yet, again, the dissent is against social and economic inequality and labour precarity. A primary goal is to reclaim economic and political relations for citizens and civil society.

In contrast, implicit in Buen Vivir is a much deeper reframing of the ways in which global justice movements challenge market globalism. This includes disagreement with free market environmentalism and the "Green Economy" promoted by the United Nations.

Buen Vivir tackles the ecological divide between the global North and South head-on. It sets up a radical discursive contrast between high-energy intensive economies of the industrial North and low-carbon eco-sufficient alternative models in the South.

Differentiating it from anti-austerity movements, Buen Vivir incorporates an environmental dimension founded on biocentrism. It demands an ethically different relationship with nature.

Certainly, within a Buen Vivir framework those other futures we want must be more austere. Buen Vivir incorporates ideas of de-growth and a stern critique of extractivism. This is another buzz word in Latin America to critique current modes of mining and hydrocarbon exploitation, industrial-scale agriculture, forestry and fishing.

Buen Vivir is of interest in any debate in an Australian context about transforming production processes towards lower use of raw materials and energy. We can criticise all we want the Abbott government's deplorable push to cut investment in wind and solar energy. But we must also bear the burden of (and act on) our own individual unsustainable energy (and food) consumption, which is among the highest in the world.

Buen Vivir may be taken up in Australia as an interesting perspective in other ways too. First, as a way to engage more deeply and respectfully with Aboriginal communal ways of being. Second, as a way to take part in emergent local movements, urban and rural, pushing to build sustainable non-capitalist alternatives.

Buen Vivir and related "transition discourses" such as "Ecological Swaraj" in India or "Eco-Ubuntu" in South Africa are calling for a significant paradigmatic or civilisational transformation.

Buen Vivir does incorporate long-standing Western critiques of capitalism coming out of politics, economics, geography and feminist thought. As a lived practice, it is aware of – and connected to – global movements of local solidarities that promote collaborative consumption and economies of sharing and care. Yet, as a social–ecological transformation, it entails more than a move to take back the economy. Buen Vivir is a move to repoliticise sustainability.

As an Andean cultural-political project, it doesn't seek a return to an ancestral indigenous past. The call is to construct common ancestral futures, where different knowledges come together, not only under the directive of Western rationality.

In Latin America, proponents of Buen Vivir are ready to influence global debates on sustainable development by fuelling ideals that other worlds and futures are indeed possible. They are hopeful and waiting to see when, for once, the North might listen respectfully to peoples of the South.